We left our house in Langley on Saturday March 8th, and

after a week on the road, and nearly 2500 kms of driving, we were finally on the “home stretch” as far as getting to our condo in Scottsdale was concerned.  We had planned to get up early on Saturday morning (March 15th), spending some time in Flagstaff, and then Sedona, before heading south down US-17 toward Phoenix.  As we left Williams for the short 25 mile drive east (to Flagstaff), we talked over the fact that we were a little bit “road-weary”, and were looking forward to staying in one place for a few days, once we arrived in Scottsdale.

By the way, knocking off the 25 miles took no time at all considering that the

posted speed limit along the 1-40 in Arizona is 75 mph (120 km/hr).  No wonder Mary was so willing to handle the bulk of the driving!  The amazing thing to us is that while we were tooling along between 75 and 80 mph (way faster than we can ever drive legally at home), we had cars just flying by us.  We even had fully-loaded 18 wheelers and RV’s leave us in their wake.

On our way to Flagstaff, we were afforded some magnificent views of Mount Humphreys off to our left.  With an elevation of nearly 13,000 feet, it is the highest natural point in the state of Arizona.

Arriving in Flagstaff, the two of us were clearly out of gas.  We walked around the historic downtown snapping a few pictures and looking in the odd store window, but we were both “feeling it” in our legs.  Our parking spot was right beside

the Babbitt Brothers building which dated back to 1888, and looming over every other structure was the Hotel Monte Vista, constructed in 1926.  It is purported to have been home to thousands of adventurous and colorful characters, from bank robbers, to headlining Hollywood stars.

Another iconic and historic building that caught our eye was the Weatherford Hotel.  It is even older than the Monte Vista, having

opened in 1900, and it’s most famous guest was Zane Grey, one of America’s best-read adventure writers.  He was a frequent visitor at the hotel, and he is said to have penned several of his novels and short stories while in “residence”.

After about an hour of walking around, we found ourselves at the Visitor’s Centre, opposite the McMillan building which opened

in 1888.  Standing at the corner of what would later become Route 66 in the middle of town, its first tenants were a bank and a hotel (the Bank Hotel), then in 1892 the hotel became the terminus for the Flagstaff-Grand Canyon Stagecoach. The McMillan Opera House, located on the ground floor, became the premiere place in town to host plays, dances, and other events.

At the Visitor’s centre we picked up information on a number of Flagstaff area attractions, including the Lowell Observatory,

Riordan Mansion (a historic home), and the Sunset Crater.  Being a huge fan of the Space program as a kid, one brochure that particularly caught my eye was “Flagstaff and the History of the Apollo Missions” (I faked sick on more than one occasion to see a Gemini or Apollo mission take off from Cape Canaveral/Cape Kennedy).  We also grabbed brochures about a number of museums, all with the intention of coming back to Flagstaff during our three week stay in the Scottsdale/Phoenix area – something that ultimately didn’t happen on this particular trip to the Southwest United States.

As we rolled out of Flagstaff, I mentioned to Mary that there was a scenic route (US-89A) to Sedona which would take us and down through Oak Creek Canyon.  The notation in my “Scenic Drives of the US” handbook said that we could expect a winding, twisting drive that followed the path of Oak Creek.   If you’ve ever driven Highway 3 out of Hope, to Princeton BC, you probably think you’ve navigated a fairly twisty road.  Let me tell you that US-89A to Sedona puts Highway 3 to shame.  There were so many curves, twists and switchbacks on this road, Mary’s forearms were actually aching from the strain of steering the Jeep down through the canyon.  The books weren’t lying though as the scenery was incredible. 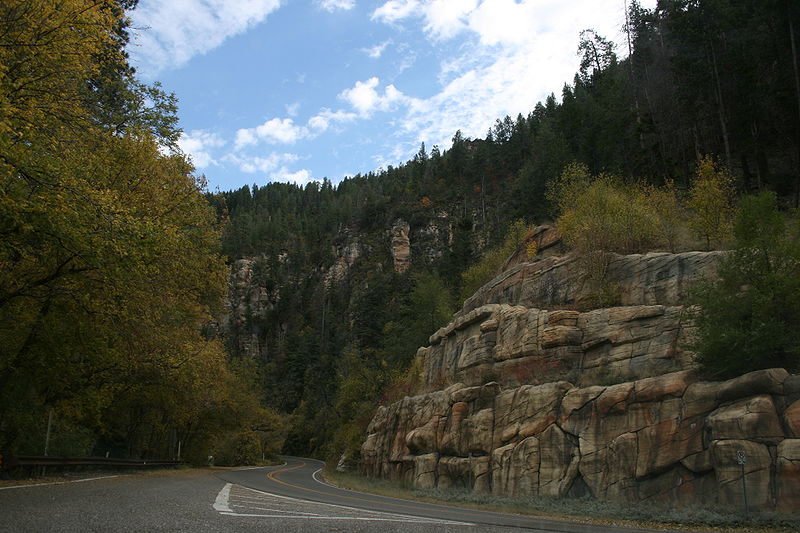 As we continued our descent through the Canyon approaching Sedona from the north, the landscape began to take on a distinct reddish tone (due to the presence of Iron Oxide in the sandstone), and at a twist in the road labelled Grasshopper Point, we were afforded the following spectacular view.

We had plenty of time to take in the red rocks as we approached Sedona. It took us

close to an hour to cover off the last 3 miles into town, as traffic on the two-lane highway was backed up well into the canyon because of a St. Patrick’s day parade.  As we finally crawled into Sedona there were people everywhere and Mary remarked “good luck trying to find a place to park so we can walk around”.  We couldn’t help but notice that on either side of the street, all the buildings were made, or at least

looked as it they were made, in that same distinctive red hue from the rocks surrounding Sedona.  We kept moving slowly on through town, and just like Flagstaff, we said we’d come back to Sedona on a week-day when it wasn’t so busy and spend some time exploring.

One of the books I picked up along the way was entitled “Roadside Curiosities of Arizona” (there are similar books for other U.S. States).  This book was mostly full of silly anecdotes, myths, superstitions and stories about unusual characters, but every so often it tipped us off to be on the look out for a genuine curiosity, like this one on US-89A, south of Sedona.  Apparently at some point in the past some entrepreneur had built a structure by the name of Xanadu, consisting of ten interconnected concrete and steel domes painted in Easter-egg colors. It was intended to demonstrate how buildings of this type can use less energy, and can also better withstand natural disasters while costing no more than conventional building materials.

Whatever the plans had been, Xanadu now lies abandoned with a fence around it and “for sale” signs attached at various intervals.

As we made our way back to US-17 for the final leg of the trip into Scottsdale, there was one final stop we intended to make – Montezuma Castle National Monument.  I’ve included a picture (below) to give you a sense of what we saw, but I intend to tell you more about it in a separate blog-post in conjunction with several other ruins that we visited during our 3 weeks in the Phoenix area.