I was 7 when Marilyn Monroe died in August of 1962.  I actually remember hearing

about it on the radio as my mom and dad were having breakfast and I was getting ready to go to school.  I don’t remember my reaction, or my parents’, I just remember the event.  For the next 10 years or so, any thoughts or emotions I had about her were usually driven by seeing an a commercial on TV for one of the movies she had made, primarily in the 1950’s.  I never actually sat down and watched one.

Then in 1975, while I was visiting my cousin Cliff Jones, he gave me a cassette copy of a rock opera he had written and produced for the CBC, entitled “Hey Marilyn” (as an aside, the voice of Marilyn was

Beverly D’Angelo) .  Cliff and I share the same birthday (June 26th), but he is 12 years older than me.  He is an enormously talented musician, writer, composer and producer, and I idolized him growing up.  So, when he gave me the tapes, I went home and listened to them right away.  I found the music so compelling that I decided I wanted to learn more about this iconic woman who seemed to be even more famous in death than she was in life.

I went on to watch every one of her movies, and then over the next 30+ years, I read pretty close to every book written about her life.  The “tell-alls”, the “inside” story of her relationships with the Kennedys, the mafia connection, conspiracy theories, and on and on.

For my 40th birthday, Mary

bought me a wonderful poster from a Chanel Ad Campaign that Marilyn had posed for in June of 1955 (the month and year I was born), and that for years had been lost in a photographer’s archive, having only recently come to light.  That framed print has been in several of my offices over the years, and today it has a special place in our home library.

As you can imagine, I have a multitude of Marilyn Monroe stamps in my collection, from the one issued by the United States in 1995…….

that had absolutely nothing to do with her life, but never-the-less have plastered her image on multiple stamps.  Monroe memorabilia collectors buy them off eBay for crazy amounts of money (I have not spent very much money on these “wall-paper” stamps, and have picked them up from various estate sales, and dealer auctions for a fraction of what people have paid for them).

Suffice to say, I love anything and everything to do with Marilyn Monroe, and remain fascinated with her life to this day.

So why I am telling you this?

Because in late March, as Mary and I were driving along Central Avenue in Phoenix, she noticed a sign outside the Phoenix Art Museum promoting a show called “Hollywood Costume”, and the sign featured an image of Marilyn Monroe.

Now to be honest, the Phoenix Art Museum was not on our “must see” or “to do” list, but the minute she saw that sign, she said “ooh, I’d love to see that, and look David, there are probably some Marilyn Monroe dresses in the exhibition, so let’s go”.

A couple of days later, we made our way there, and this is the first thing I saw in the lobby when I walked in the door.

Before I tell you about the Hollywood Costume exhibit, let me tell you that the Phoenix Art Museum is the largest museum for visual arts in the Southwest United States.  It has been open since 1959 and was designed by a former student of Frank Lloyd Wright.  Popular international exhibitions are shown along side the Museum’s collection of more than 17,000 works of American, Asian, European, Latin American, Western American, modern and contemporary art, and fashion design.

The Hollywood Costume exhibition falls into the category of both a popular international exhibition and fashion design, and I have to say that it was absolutely fascinating to us.  We are both movie junkies, (Mary even took a course in Film History at St. Clair College), and this exhibition celebrated costume design as a key component of cinema storytelling.  In their words “this major multimedia exhibition explores the essentials of costume design and illuminates the costume designer’s creative process, bringing together more than 100 of the world’s most iconic costumes from a century of filmmaking”.

For movie fans like us, the show was a rare opportunity to see clothes worn by Judy Garland in the Wizard of Oz, Audrey Hepburn and Rex Harrison in My Fair Lady, the cast of Ocean’s 11 and so much more.  There was Harry Potter and Fanny Brice.  Superman and Austin Powers.  Indiana Jones and Queen Elizabeth.  Rocky Balboa and the Blues Brothers.  And of course, Marilyn Monroe’s famous dress from the Seven Year Itch.  Here are a few stock images from the show as photography was not allowed. 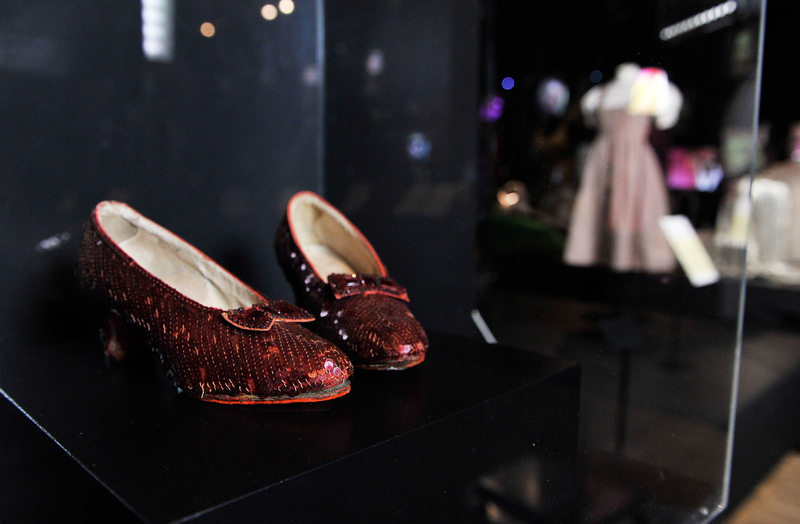 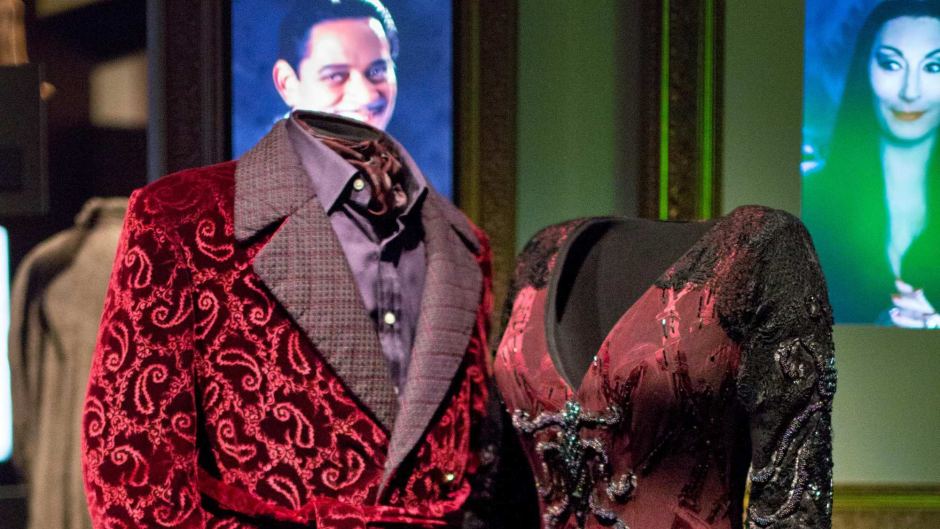 We found out that many of the costumes have never left private and archival collections in California, and most have never been publicly displayed or seen beyond the secure walls of studio archives. It was truly a once-in-a-lifetime event in that respect.

There was also a companion exhibit to

Hollywood Costume called Hollywood Red Carpet, and as the title suggests it was a celebration of red carpet glamour.  It paired photographs of various actresses in costume for the role for which she was nominated with a selection of gowns worn to the Academy Awards.  It featured gowns worn by Glenn Close, Amy Adams, Jessica Chastain and many more Oscar nominees.

There was one other featured “travelling exhibition” on display at the time of our visit – “Read My Pins”, a collection of jewelled pins worn by former Secretary of State Madeleine Albright.

During her years of public service, she became well-known for wearing and using pins to communicate her mood, and to set the tone for the meeting of the day.  In one well-documented instance, when she vocally opposed Sadaam Hussein’s unwillingness to comply with UN inspections, government-owned Iraqi newspapers called her an “unparalleled serpent.” When Secretary Albright was next scheduled to meet with Iraqi officials, she reached into her jewelry box and selected a gold pin featuring a serpent coiled around a branch, and the legend began.

Here are just a few of the beautiful and interesting pins that were on display.

We didn’t want to spend the entire day there, and our interest in visiting the Phoenix Art Museum had been exclusively driven by the special exhibitions that were on display.

We did however get drawn into one of the galleries and the art it contained just blew us away.  Lifelike explores a wide variety of artworks through a playful lens, focusing on everyday objects and situations.  It featured familiar items prepared in meticulous detail, and in some cases on a grand scale, but they were all made from unusual and/or unexpected materials.

Take for example this bag of garbage.

It has been sculpted out of marble and weighs 700 pounds!

“Evan Penny” is a remarkably life-like self-portrait of the artist that protrudes from a wall.

It was created from silicone, pigment and hair.

How about this 1970’s kitchen, meticulously re-created. 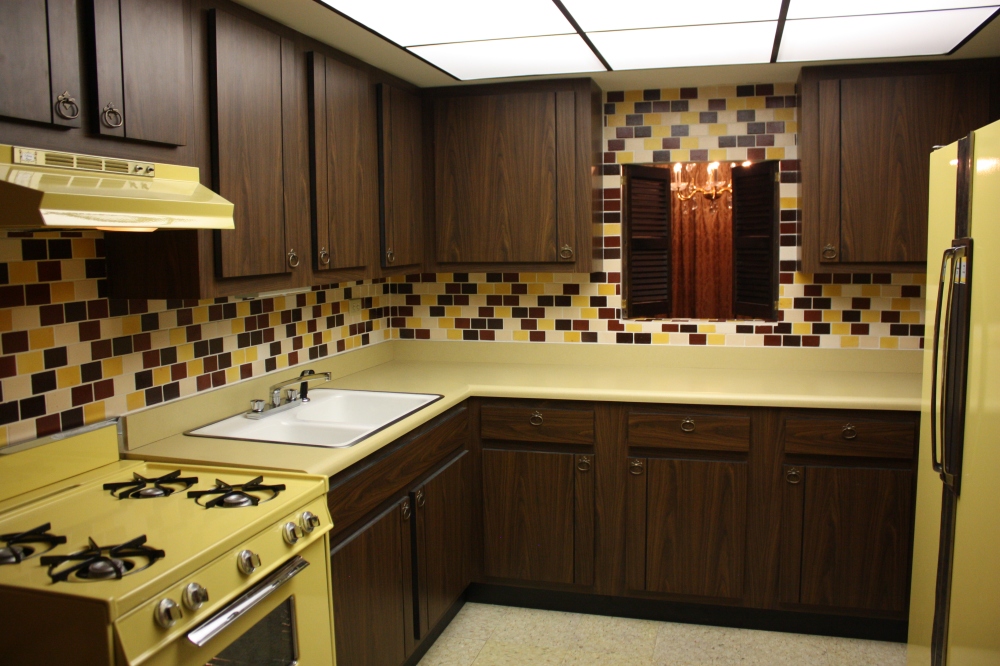 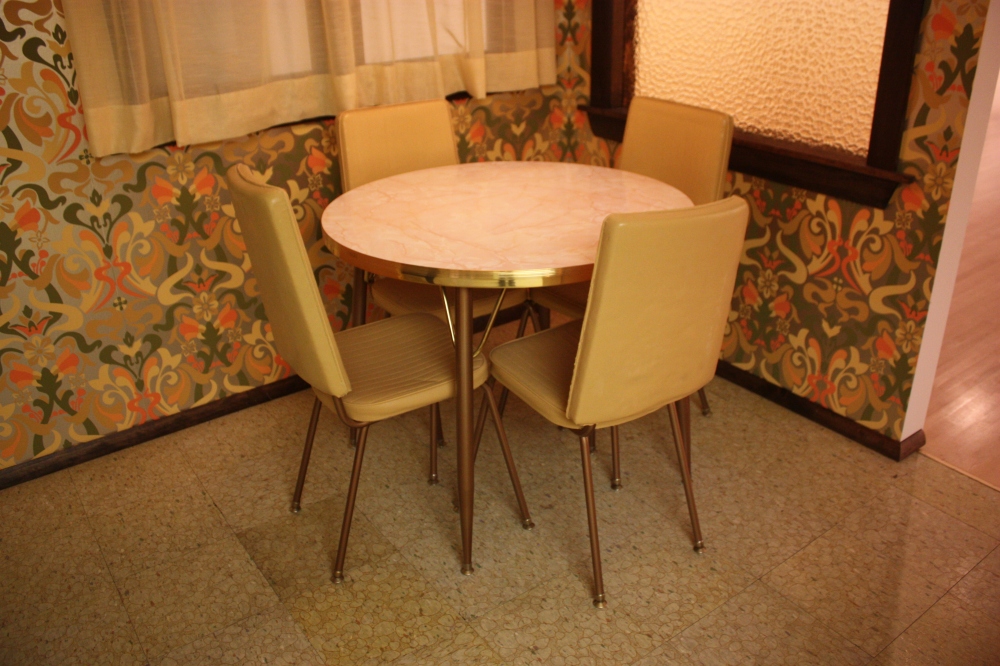 The artist scanned a single linoleum tile from the original house then laser-etched into composite tile to complete the floor.  The wall-paper was hand-drawn, then re-silk-screened.  And the most amazing element about the kitchen was the fact that table, chairs, and kitchen cabinets, were all sculpted from wax!!!!!.  The only “real” pieces, were the fridge and stove.

The gallery was filled with all kinds of exhibits like this, all of them fabulous.  Then just as I was leaving, I  noticed a room with tape across the doorway.  It was clearly an exhibit under construction and I wondered why they had left the door open to the public.

Upon closer inspection and with some explanation from a smiling museum guide, I realized that this was in fact another display and that all of the materials in the room were made from cardboard, plastic, tin, silicone, and various other materials –  all designed to look like a room under construction, but none of it was “real”.

I am so glad that we happened to be driving along Central Avenue, and that Mary happened to see a sign promoting the Hollywood Costume exhibition.

I guess advertising must work after all (tee hee). 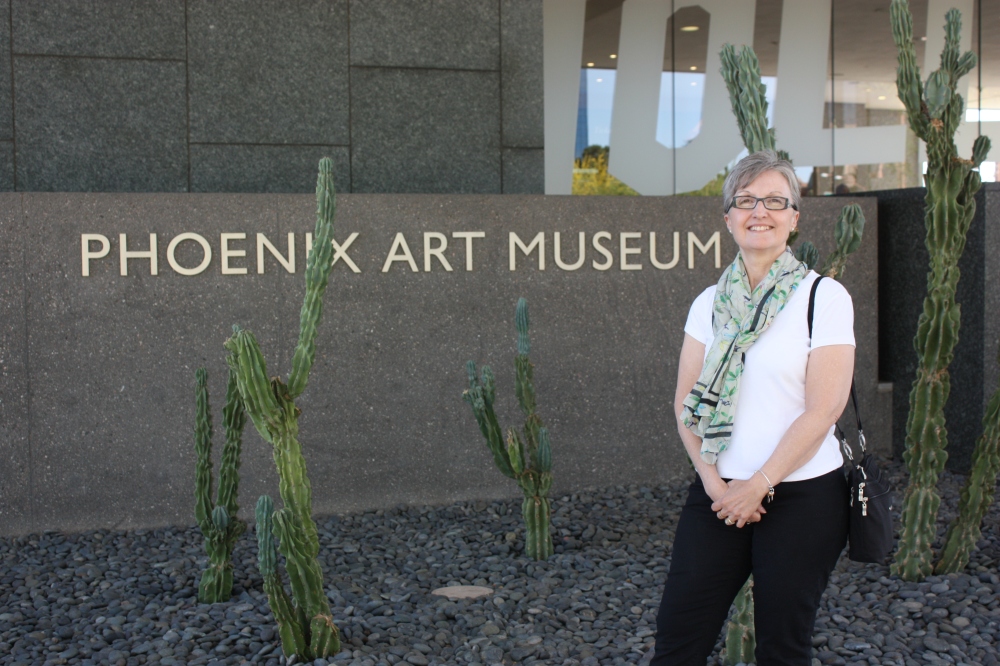