Despite the lovely facilities at the Daviot House in Ayr, neither Mary nor I slept very well as we continued to try and make the adjustment to the 8 hour time difference with home.  I awoke at 4:15 local time, and Mary didn’t make it much past that.  With breakfast a few hours away, I read, made some travel notes and managed to get caught up on all my Words with Friends games.  Mary got an early start on her Tai Chi exercises for the day.

As dawn broke, it became apparent that the rains that had been forecast for the weekend, had arrived.  We weren’t too worried as our first stop of the day was going to be an “inside” one, but we knew we weren’t likely to see any sunshine today. 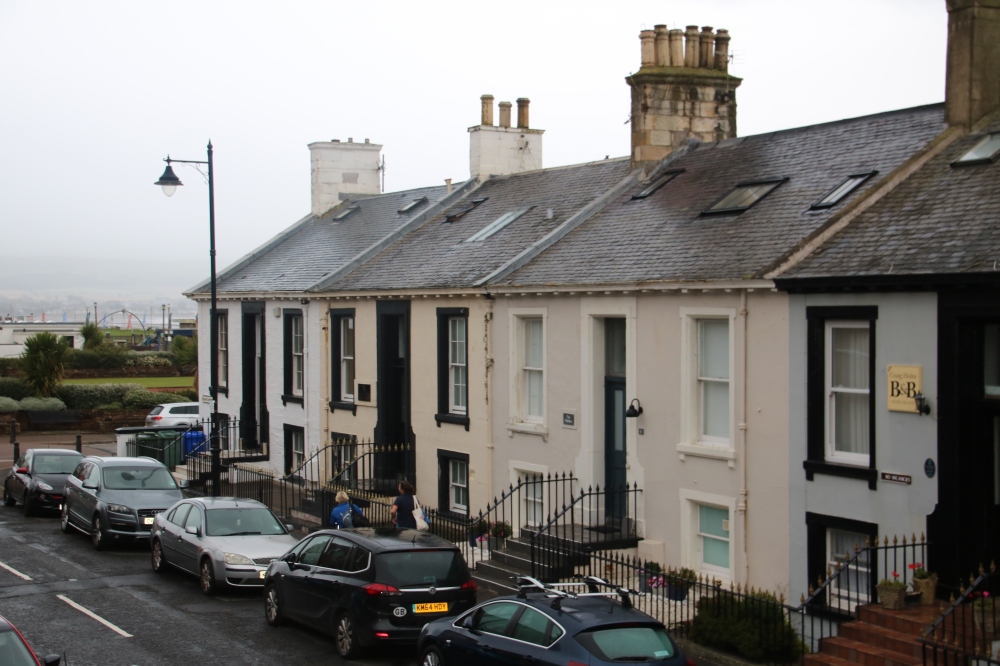 Well-sated after a very nice B&B breakfast, we were on the road before 9 on this rainy Saturday, and we made our “escape” from Ayr, just as the air-show traffic was starting to converge on the town.

Our destination was Culzean Castle, pronounced “Kull-ane” as we were to find out, and it is the ancestral home of the Kennedy clan dating back to the late 1700’s. 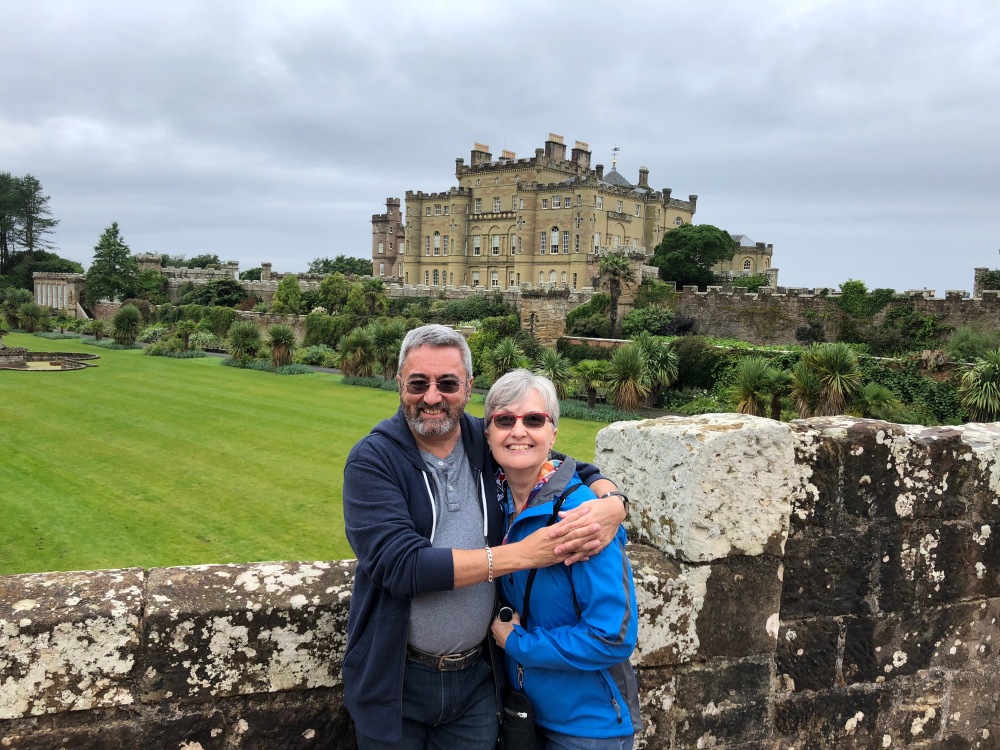 Culzean is a magnificent castle that overlooks the Firth of Clyde on the Ayrshire coast, and over the years it was modified and expanded upon by several generations of Kennedys’.  The last Kennedy to live there left the castle in 1945, and the property (castle and grounds) was given to the National Trust for Scotland in order to avoid inheritance tax.  In doing so, the Kennedys stipulated that General of the Army Dwight D. Eisenhower be given an apartment at the top of his castle in recognition for his role as Supreme Commander of the Allied Forces during the WWII.  The General stayed at the castle four times over the years, including once while President of the United States in the 1950’s.

“Are you kidding me, I thought, do you know how perfect this is for Mary and I”.

We were given a sheet with 20 Lego characters on it, and were told that we would find 19 mini-figures hidden in the rooms (1 per room).  We were also told that one character was on holiday (I think that meant they had misplaced him), and that the final character we would find would be in the last room we would visit – the kitchen.

The Lego-scavenger hunt added an additional element of joy to our visit to Culzean Castle, and yes, we did find all the hidden characters.  Okay, we may have had a bit of help from an eagle-eyed young lad in a couple of rooms, but the rest we found ourselves. 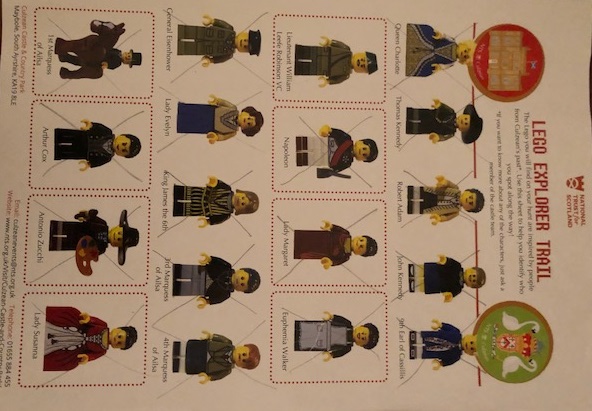 We didn’t encounter any of the reported seven ghosts that supposedly haunt the castle, a cast of characters which includes a piper and a servant girl, but the Most Haunted team from the Living TV network reported sightings of ghosts for an episode broadcast in 2002.

As we left the castle, we spotted the first “new” bird of our trip,  one we can add to our combined life-list, a Redstart, who happily posed for me against a grey and misty background.  We trudged back to our Vauxhall rental through steady rain, and “scotch mist”, and hit the heater as soon as we got back to the car. 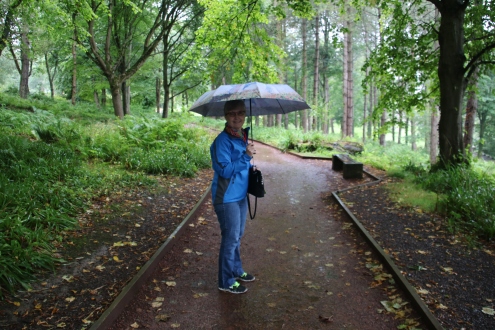 Shortly after leaving the castle, we encountered our first rogue sheep of the trip, one who had managed to escape through the hedgerow along the side of the road.  It was sauntering down the middle of the round in a very unconcerned manner.

Our next destination was Galloway Forest, some half hour south-east of the castle, and in good weather, the drive through the forest is described as ” a chance to see one of the most beautiful areas in Scotland, with heather-clad hills, rugged rock faces, and moorlands and lochs that rise up to the grandeur of the mountains”.  Unfortunately, we’ll have to take their word for it, as for most of the 30 minute drive through the forest, the visibility was limited by a low cloud ceiling, and a steady rain.

About five minutes from the Newton Stewart end of the park, we took a windy bumpy road up to a small parking lot, where after a short but wet walk, we came upon “Bruce’s Stone”.

Bruce’s Stone commemorates an occasion in 1307 when Robert the Bruce routed the English forces during one of the earliest encounters of the border wars that  waged  on and off through to the latter years of the 16th century. The stone sits high on the north shore of Lake Troon which even in the rain and mist was a beautiful site.

Back in the car, we made our way back down the single-lane road to the Glentrool Visitor Centre where some raging rapids begin to wind their way downhill to Lake Troon which we had been looking down upon just a few minutes earlier.

From there, it was just a short ride into the town of Newton Stewart, a traditional market town cited on the banks of the River Cree.  The Cree Bridge stands at a point where Robert the Bruce forded the river, while on a pilgrimage to the shrine of St. Ninian at Whithorn, in 1329.

We booked ourselves into one of three old hotels in town,  “The Crown”, and while it was highly rated on Booking.Com, it was one of the very few times we have been underwhelmed by our accommodations while we are out on one of our road trips.  We knew the next day (Sunday) was going to be another wet one, so we hunkered down for the night in the hopes of getting a good sleep.