Its Monday September 3rd, and it is still raining.  I’m getting a little tired of hearing things like “oh you’re from Vancouver, so you must be used to this”, or “too bad you weren’t here in August, it was gorgeous”.  We’ve also hear a lot of “that’s a shame about the rain, September’s aren’t usually like this!”.  I think our Morton Villa host Susan felt bad for us, as she had done her best to dry out our shoes from the previous days’ adventures, and she kept apologizing for the weather all throughout the lovely breakfast she laid on for us.

We were packed up and ready to leave Dumfries shortly before 9 AM, and our first destination in the rain was the village of Gretna Green, some 30 minutes to the east.

Gretna Green lies just minutes from the Anglo-Scottish border, and if you are travelling from the west as we were, it is the first place where one can cross into one country from the other.  But, more than just a border town, Gretna Green is home to the “anvil marriage”, and that is not a reference to being weighted down by the burden of exchanging wedding vows!

It seems that in the middle of the 18th-century, English lords approved new laws to tighten marriage arrangements. Couples had to reach the age of 21 before they could marry without their parents’ consent and their marriage had to take place in a church. Scottish law, however, was different: you could marry on the spot, in a simple ‘marriage by declaration’, or ‘handfasting’ ceremony, only requiring two witnesses and assurances from the couple that they were both free to marry.

With such a relaxed arrangement within reach of England, it soon led to the inevitable influx of thousands of young couples running-away to marry over the border. Since Gretna Green was the first village in Scotland one came to when leaving England, it was perfectly placed to take advantage of the differences in the two countries’ marriage laws.  From the stories I read, it seemed these “border-dash unions” often occurred with an angry father-of-the-bride in hot pursuit.

When couples began eloping to Scotland, the Blacksmiths Shop very quickly became synonymous, as a hotbed of scandal and intrigue with many daughters from respectable families choosing to flee here to “marry a scoundrel”.

The ‘Anvil Priests’ would perform the ceremony for “a wee dram or a few guineas” and the hammering of the anvil soon became a notorious sound.  You might say the Blacksmith would join couples together in the “heat of the moment”. 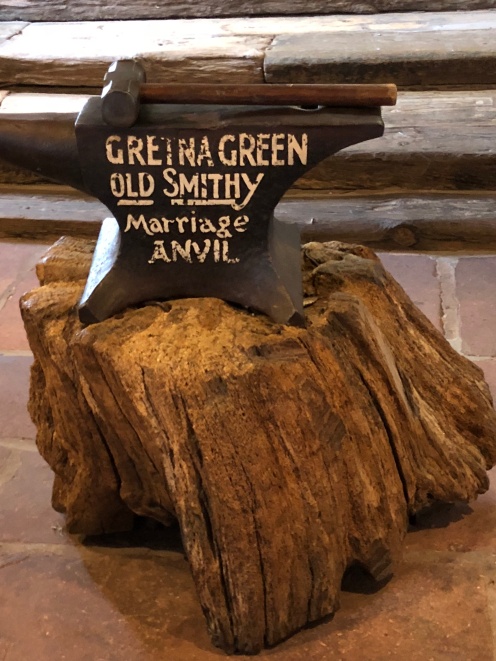 The  Blacksmith Shop has become Gretna Green’s best known marriage venue, and since September 2018 is the occasion of our 40th wedding anniversary, we thought it might be both fun and romantic to perform our own private “anvil ceremony”. 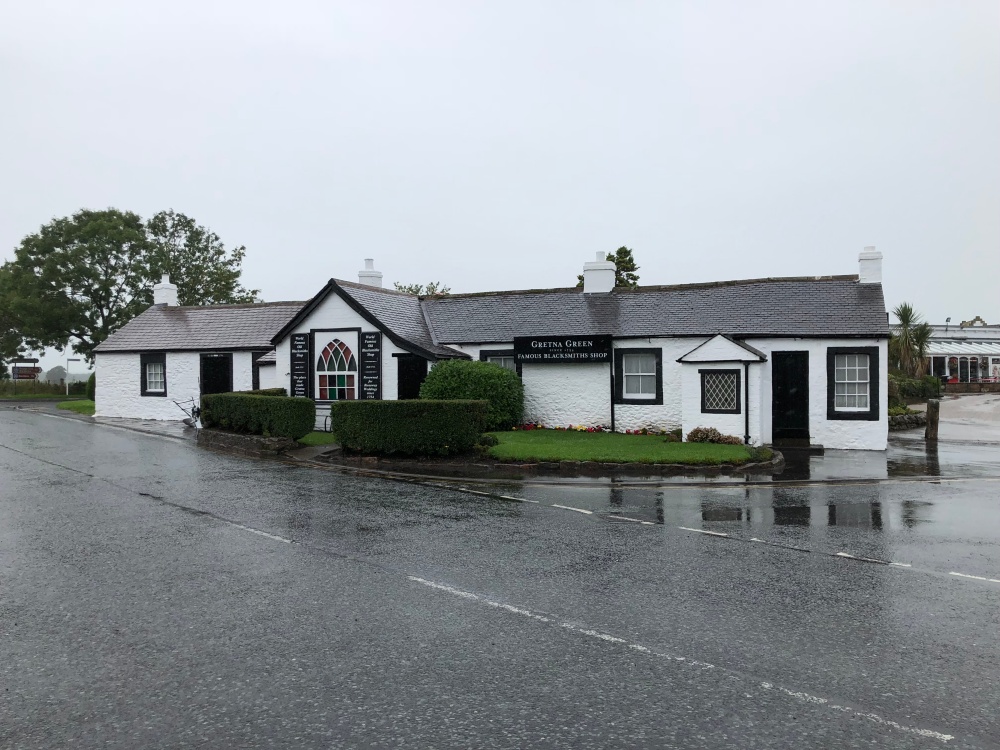 We didn’t have a specific plan in mind, but in the days leading up to our arrival, Mary spotted soulmate rings at a number of the castles we visited.  They had an expression of love on the rings inscribed in Scottish Gaelic.  We liked the idea of buying each other a ring and carrying them to Gretna Green where we would place one on each other’s hand, just as we had done back in 1978, in Amherstburg, Ontario.  As you can see from the pictures below, that is exactly what we did. 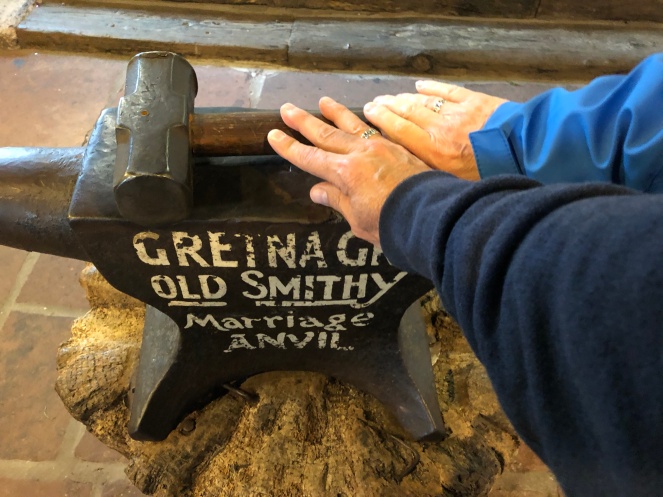 After sharing our special moment, Mary and I took a few pictures inside and outside the Blacksmith museum, and before leaving Gretna Green, warmed ourselves with a cup of tea in the onsite cafe.  We watched as tour bus after tour bus arrived, and visitors tentatively disembarked into the pouring rain.

Using the weather as a planning tool for our adventures, we picked an inside attraction for our next stop, one with a most interesting name – The Devil’s Porridge Museum.

When I first told Mary the name of our next destination, she looked at me like I was trying to pull one over on her, and pretending there was a museum dedicated to the making of porridge.  Despite my penchant for bad jokes and puns, I assured her Devil’s Porridge referred to a name given to the making of cordite for use in ammunition during the two world wars. 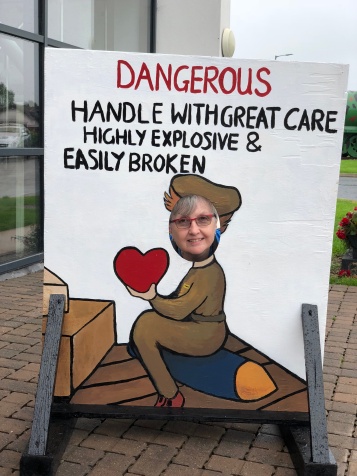 The museum is located in Eastriggs, along the Solway Coast, and as the story goes, in 1915, the Times newspaper reported a significant lack of ammunition for British soldiers fighting in France. The Government decided something needed to be done about the ‘Shell Crisis’, and as a result, Lloyd George was appointed Minister of Munitions.  He embarked on his greatest project, HM Factory Gretna, the largest munitions factory in the world on the quiet Anglo-Scottish Border.

The magnitude of this enterprise was staggering to Mary and I as we discovered that HM Gretna covered a nine-mile rural site, stretching from Longtown in England to Dornock in Scotland. In the Autumn of 1915, more than 10,000 navvies (men who built railways), mostly Irish, descended on the area to begin construction of HM Factory Gretna. The Navvies worked tirelessly to get the factory into production quickly to meet the needs of troops on the Western Front and by April 1916 munitions production had begun. Hundreds of chemists, explosive experts and engineers were recruited from across the Commonwealth to organize and manage the production of  cordite.

Almost 12,000 young females travelled from across Britain to do their bit for the war effort at Gretna. They were employed to manage the process – from mixing the highly volatile ‘devil’s porridge’ paste through to producing the finished cordite propellant, destined for the shell-filling factories. Sherlock Holmes author, Sir Arthur Conan-Doyle coined the phrase ‘the Devil’s Porridge’ after visiting as a War Correspondent and witnessing the Gretna Girls mixing this dangerous mixture. 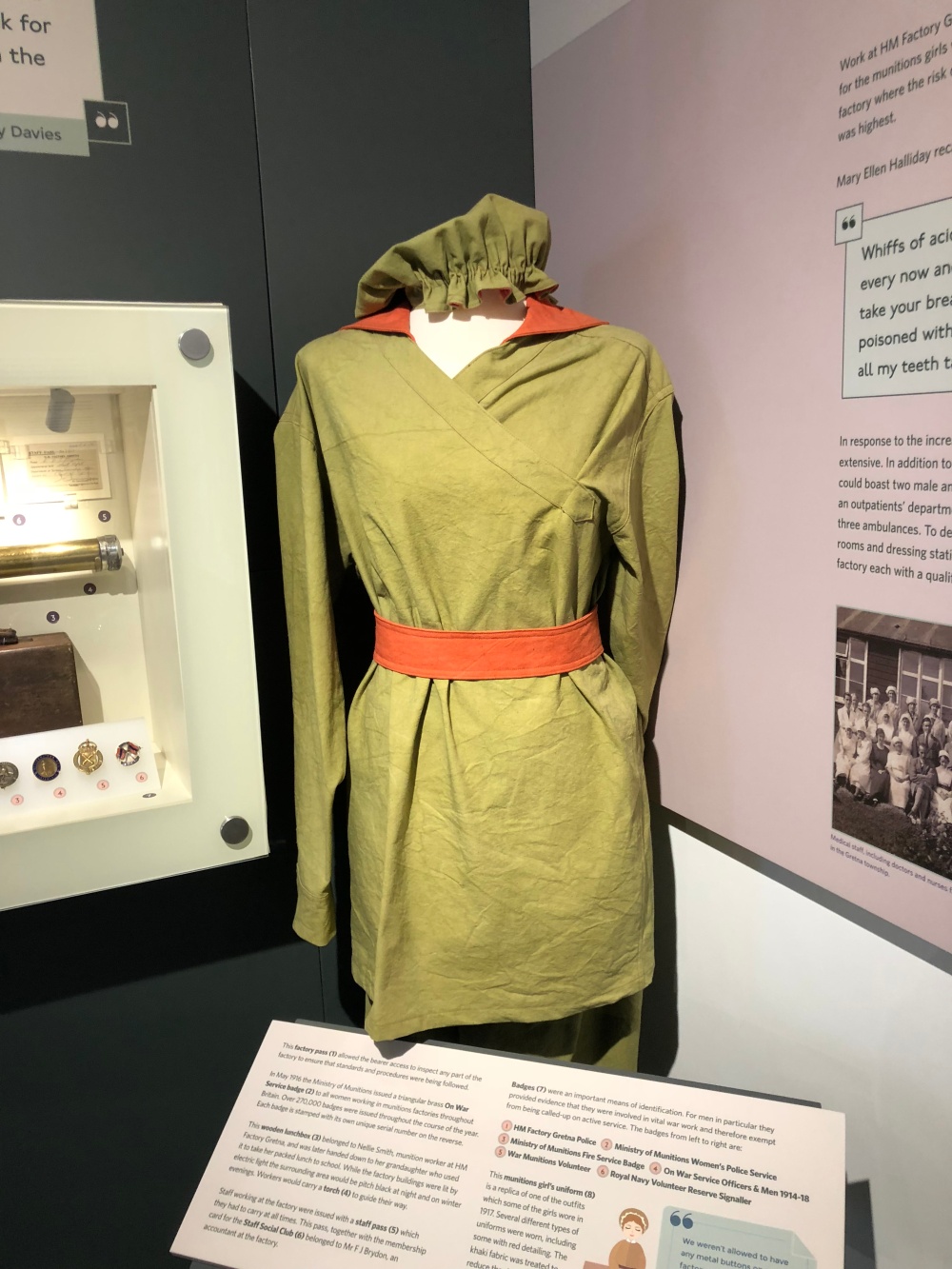 We were astonished to read about these young women who worked in dangerous and life-threatening conditions to aid the war efforts. Stories of women losing all their teeth because of the acid fumes they inhaled, and developing health issues that shortened the lives of many of them.

Since we both love history, and are children of parents who lived through and served in WWII, places such as this have a profound meaning to us.  We have enjoyed a lifetime of peace because of the efforts of people like those who are celebrated at the Devil’s Porridge Museum and I believe it is both sobering and important to be reminded what previous generations did to give us our freedom.

Okay,  back to Abbey ruins, and Castles now, and the next stop on our Monday journey was Caerlaverock Castle, about 7 miles south of Dumfries.  What makes it particularly unique and interesting is that it is triangular in shape.  It was first built in the 13th century and was a stronghold of the Maxwell family for over 400 years, until being abandoned around 1640. You can’t tell from the picture below but the wind was blowing rain into Mary’s face as I took the picture.  It was nasty weather!

It was considered to be relatively impenetrable given that it was surrounded by water and swampland on two sides, and, a deep moat in front of the castle.  That proved to be untrue in the end, as it was besieged and abandoned for the last time in 1640 after coming under fierce attack from English forces.

Despite its abandonment for close to 375 years, the interior walls and structure are remarkably well-preserved, and feature some of the most ambitious architecture Mary and I have come across in any of the castle ruins we have visited over the years.

As the afternoon went on, the rain began to let up a little, and we were hopeful that we had weathered the worst of the storms.  Our travels next took us to the town of New Abbey, where we were able to explore the ruins of the Abbey of Dulce Cor, better known  as “Sweetheart Abbey”.

Dulce Cor was a Cistercian Monestery founded in 1275 and it served as the centrepiece of worship for the surrounding area until it was suppressed in 1624. The Abbey was founded by the Devorguilla of Galloway, in memory of her husband, Baron John de Vaux.  After his death, she kept his embalmed heart (in a casket of ivory and silver), with her for the rest of her life, and it was buried alongside her when she died. In line with this devotion to her late husband, she named the abbey Dulce Cor (Latin for Sweet Heart).

It is a stunning building, having been built using deep-red local sandstone, and despite the scaffolding, we were still able to explore enough of the ruins to be impressed by the magnitude of what had once stood on this ground. 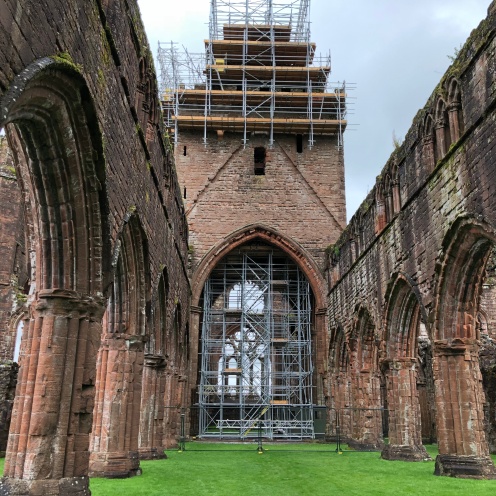 Just down the hill from the Abbey was the fully restored water-powered New Abbey Corn Mill.  We were the only visitors that afternoon so were afforded a one-on-one tour by the volunteer who operated the visitor centre at the mill.  We were treated to a wonderful insight into Scottish rural life in years gone by, when the mill and all it produced was the lifeblood of the community.

It is a three-storey whitewashed building that dates backs to the late 1700’s, but there is evidence to suggest there was a mill on the site even further back to perhaps as early as the late 13th century, around the same time as the Abbey was built.  Our guide told us that locals still refer to the mill as “Monks Mill”.  It is in full working order and on most summer day visitors can see it run as it would have all of those years ago. However, on days when water is in short supply, as it was during the time of our visit (in spite of all the rain), one has to imagine the mill in action through a video called “the Miller’s Tale”.

As she has in the past, Mary amazed me with her knowledge of how the mill operated and pointed out pieces of equipment that had been present on the farm she grew up on.  Our country girl – city boy marriage has made for interesting discussions and eye-opening moments throughout our entire 40 years together.

As the rain turned to a light sprinkle, I went online to find us a room for the night.  I somehow managed to miscalculate where we were in relation to where we wanted to stay, and ended up booking a B&B some 50 minutes away, instead of the 10-15 minutes I’d been shooting for.  That accident turned into an absolute blessing, as we ended up at the Riggs B&B,  an old farmhouse run by a young couple from Manchester, who were raising their two young children in a gentle rural environment. 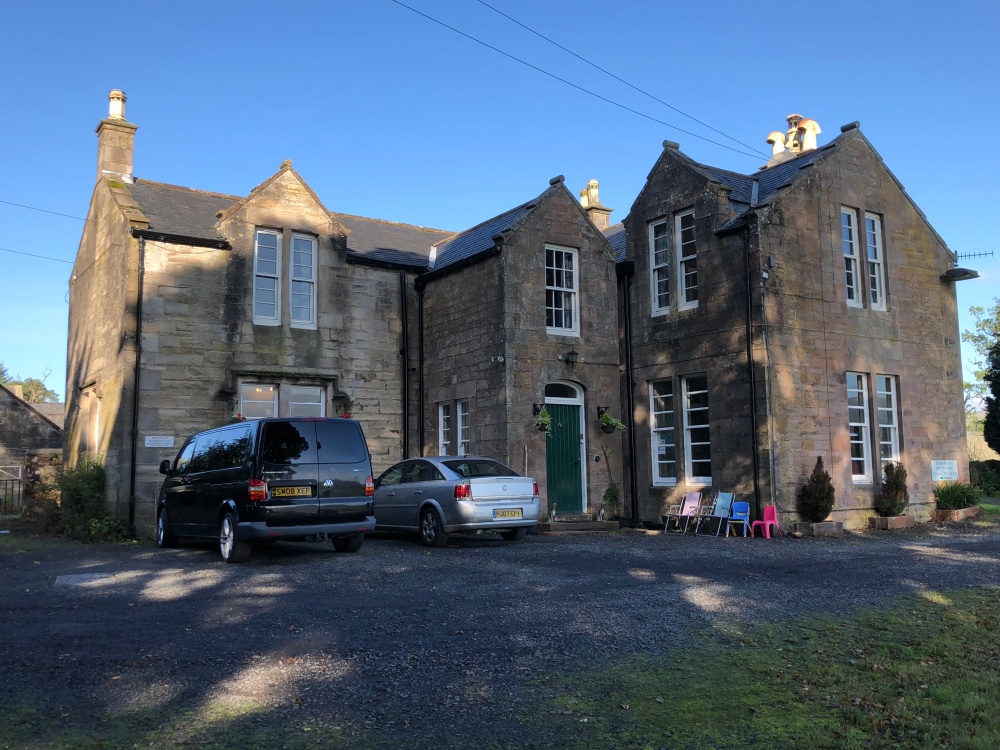 The house was big and warm.  The bedroom was ample and looked out onto a field filled with sheep and cows, and James, our host put on a fire in the big front room where I was able to read and write, while Mary got in some end-of-the day Tai Chi practice.  While so many B&B’s are well-run small businesses, this was more like a visit with friends who live in the country.  In so many ways it reminded Mary of the home she had grown up in, and after three days of rain-soaked sight-seeing, our visit to the Riggs B&B was an absolute blessing.

While the rain hadn’t stopped us from enjoying ourselves, or from seeing everything on our list, we were delighted to hear that the new few days looked to be dry and sunny.  We went to bed looking forward to the next day’s adventures, which were going to take us to the place where Robbie Burns had produced his most prolific and best-known works.