Day seven of our 2018 Scotland adventure and we kicked it off with another splendid B&B breakfast – this one served us to by Jane, our host at St. Ola in Jedburgh.  We were on our way shortly before 9, thankful for another positive experience afforded us by the “book em as we go” approach we take on our road trips. 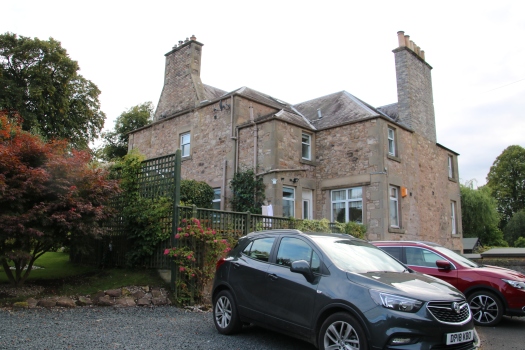 It seems that unless we are driving to a destination first thing in the morning, we often find ourselves with time to kill, as most attractions and shops don’t open until at least 9:30, and more often than not, 10 o’clock.  Everything we wanted to see in Jedburgh was within walking distance from the High Street, so we found a good parking spot, and after a quick wallet refill at a Bank of Scotland, we arrived at the Mary, Queen of Scots’ Visitor Centre – the first to open! 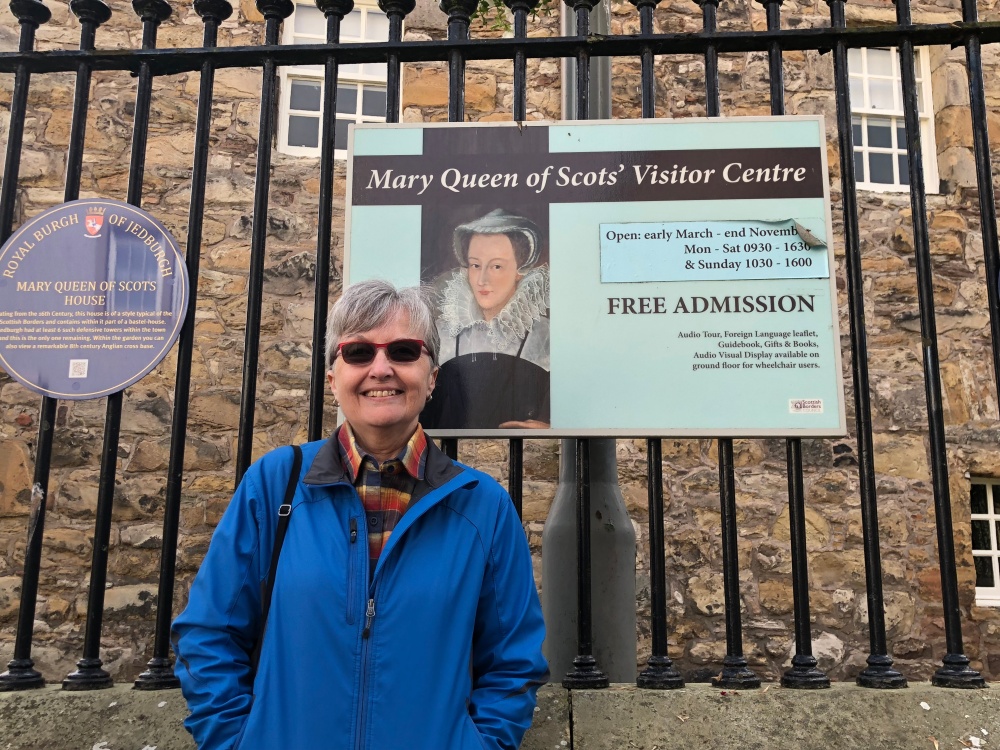 Mary Stuart, better known as Mary, Queen of Scots, is one of the most romantic and tragic figures in history.  At one time she had a claim to the throne in three countries: Scotland, France and England.  She was widowed at 17, and her second husband was brutally murdered by her third.  She spent most of her adult life as a prisoner, and was finally executed for treason.

The Royal Burg of Jedburgh played a central role in the drama of Mary’s life.  Her visit in October of 1566 was a turning-point,as not long after, her life unravelled under the political and religious forces of the time.  Before her death, she is famously said to have remarked: “Would that I had died in Jedburgh”.

Tradition had it that the reigning Queen usually stayed at the Spread Eagle Hotel in the High Street (it is still standing today), but on this occasion a fire forced Mary to find alternative lodgings in a tower house in Jedburgh, rented from her loyal supporters, the Kerrs. 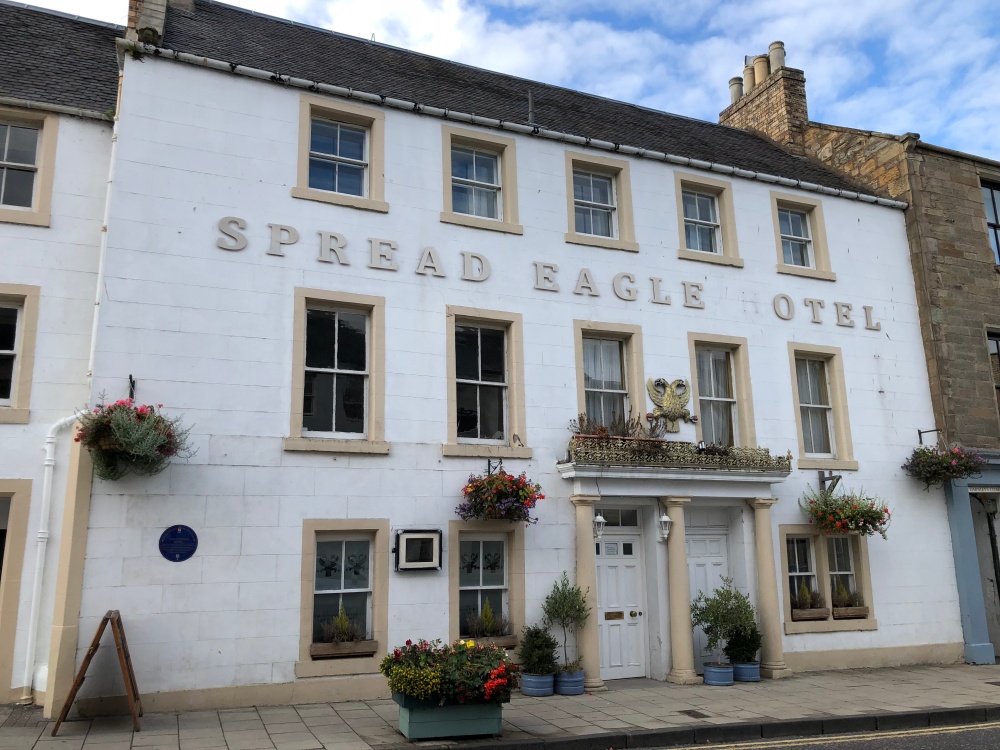 Dating from the 16th century, the Kerr’s house is of a style typical of the Scottish borders. At one time, Jedburgh had six of these defensive tower structures, but this is the only one still standing. 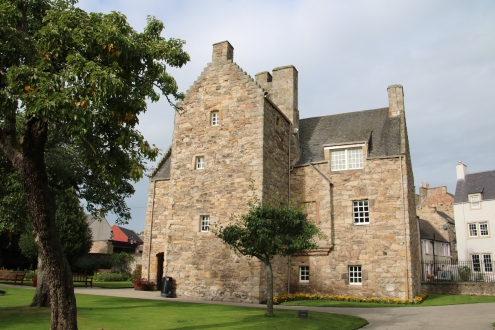 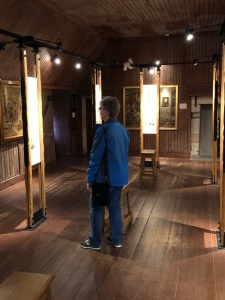 The Visitor Centre tells the story of Mary’s life, laid out in great detail on a series of panels throughout the Visitor Centre.  In particular, they highlight that October 1566 visit, as it was her first visit to the Borders.  During her visit, Mary decided to visit the Earl of Bothwell, a round trip from Jedburgh of almost 50 miles by horseback, but not unusually demanding for an excellent horsewoman like Mary.  As the day unfolded, the weather turned wet and stormy, and Mary was thrown by her horse into a bog.  By the time she returned to Jedburgh, she was drenched to the skin, her clothes black with peat bog mud.  She caught a severe chill, which quickly turned to a fever.  Her condition became acute, and according to written reports of the day,  she fell unconscious several times.  Her condition was so serious that she began to try and dictate her will. After 9 days, during which at one point, rumours of the Queen’s death began to spread, Mary slowly began to recover.

Mary was at the height of her popularity at the time of her Jedburgh visit, but after 1566, her life swiftly unravelled, and less than two years later, she was imprisoned by her English cousin, Elizabeth 1.  That was the start of 19 years in captivity, which ultimately

ended when Mary was implicated in a plot to assassinate Elizabeth and seize the throne.  Elizabeth signed Mary’s death warrant on February 1st, 1587, and just seven days later, Mary was beheaded.  It was common practice in those days for desk masks to be made of royalty and prominent citizens, and many copies exist of Mary, Queens of Scots.  The version to the right resides in the Jedburgh Visitor Centre,  and is one of the few that was hand-painted in an attempt to more closely reflect how she had actually looked.

The Jedburgh Visitor Centre was an unexpected delight and we both felt that it was a really excellent museum.

Our plan was to head up the steep main street of Jedburgh to the historic Castle Jail & Museum at the top of the hill, but the night before we had spotted a quilt and knit shop that had called out to Mary as we walked by. 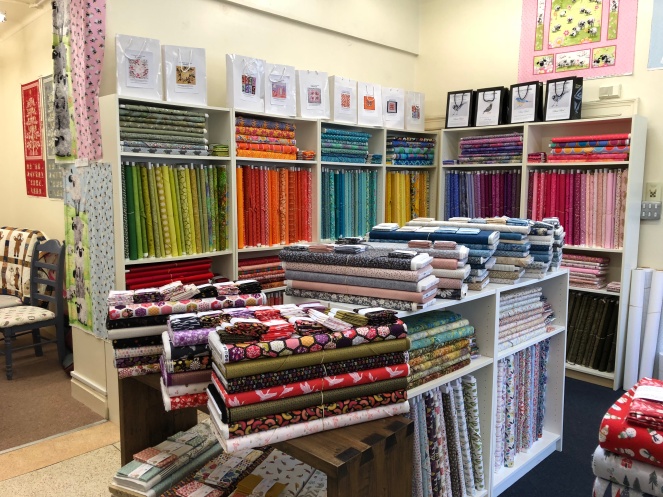 While Mary didn’t purchase anything during her visit due to the challenges of getting stuff back home on the plane (luggage weight limitations),  she did make a new friend, as the owner of Stitchin at No 1, was reluctant to let Mary go.  I stood by, while they chatted for nearly 20 minutes, but its nothing new for me, being married to such a talented seamstress, quilter, cross-stitcher, knitter etc. etc.  I’ve even picked up enough of the lingo by osmosis over the years, that I can occasionally participate in these conversations.

To reach Jedburgh Castle Jail & Museum, one has to walk through the town square and then mount a fairly steep hill, roughly a 15 minute walk – nothing for the two of us as we are avid walkers, and it gave us a chance to check out the shops and homes on each side of the street. 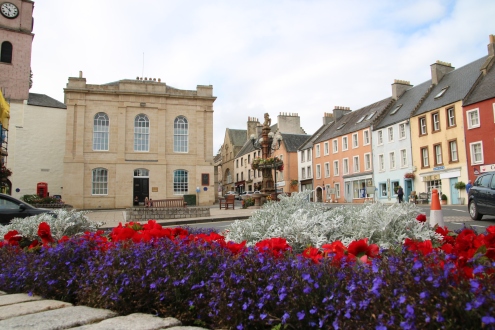 The Castle Jail was built in 1820, and it is considered the finest reform prison in Scotland, based on the innovative ideas of the great prison reformer, John Howard.  Before Howard’s reforms, conditions in prisons were shockingly inhumane.  Criminals, debtors, children, and those awaiting trial were all jostled together (looks like a particularly bad one below) 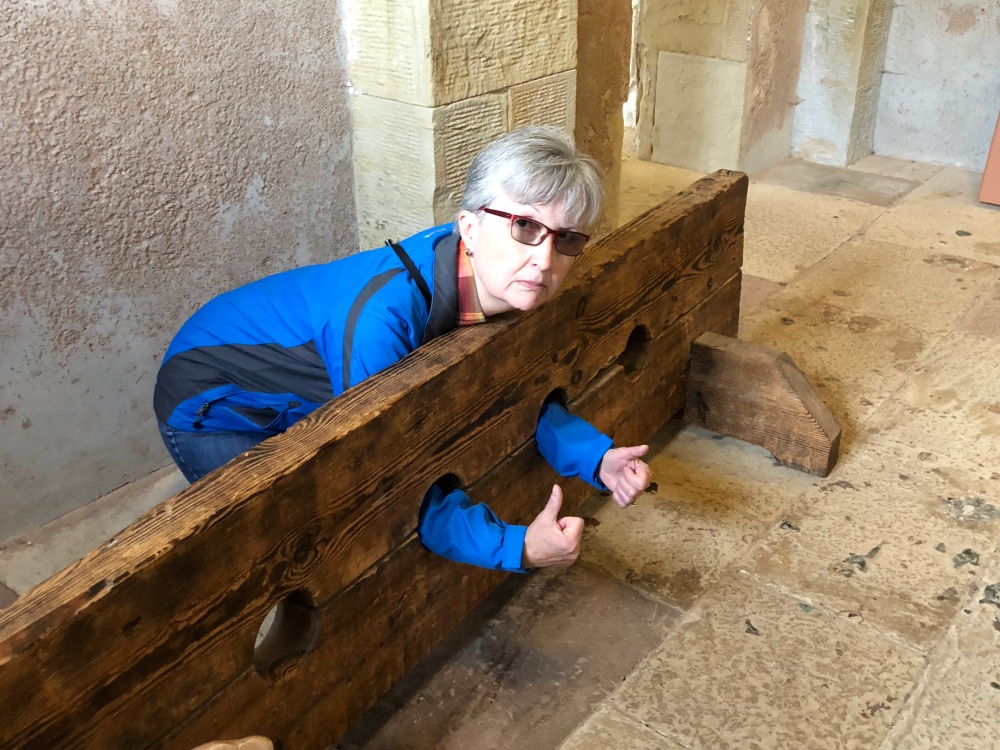 The cells were filthy, overcrowded, and disease-ridden.  Jailers were not paid, instead relying on bribes for a living, so you can imagine the level of corruption that must have existed.  Howard’s 1777 report on the State of Prisons kick-started a new era in prison reform, arguing that jails should be places of improvement as well as punishment.  Jedburgh Castle Jail was designed to reflect his ideas, and is therefore a unique example of prison history. 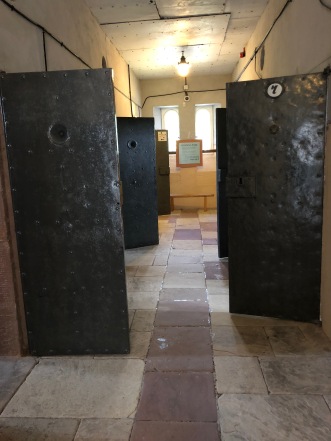 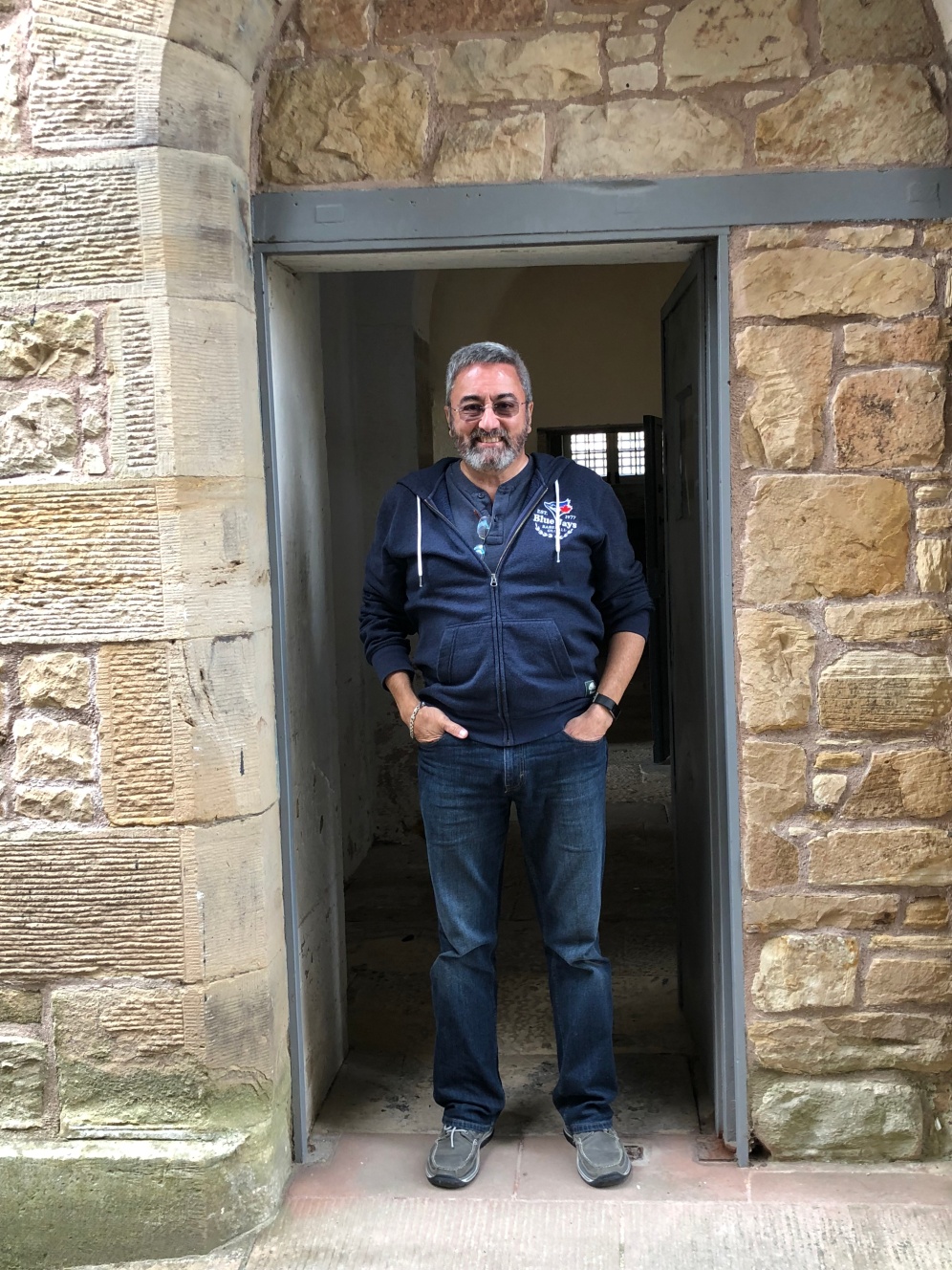 In addition to the exhibits and stories detailing the changes Howard made to the prison system, the Castle Jail Museum also served as repository for all things Jedburgh, giving us an opportunity to learn more about the town that we quite enjoyed visiting.

We still had two more places we wanted to get to before the day was done, and having spent the entire morning in Jedburgh, it was time to hit the road.   Our next stop, roughly half an hour’s drive away, was Floors Castle, built for the 1st Duke of Roxburghe in 1721, and home to the present day  10th Duke of Roxburghe and his family.  It is the largest inhabited home in Scotland.

The Roxburghe estate extends for a staggering 54,000 acres, and employs a full-time staff of 150, across a range of business activities including farming, forestry, renewable energy, tourism, hospitality, and leisure.  Two of the more important commercial enterprises are the thoroughbred stud, and salmon fishing.

Since this is an actual private residence rather than a museum or historical site, we were not allowed to take any pictures inside during our 45 minute visit.  What I can tell you from my notes, is that the Entrance Hall features a stunning collection of paintings and artwork, including  a series of plaster figures of the Queen’s Highlanders presented to the 6th Duchess of Roxburghe by Queen Victoria.  They are a copy of the silver originals that reside in Balmoral Castle, a Royal Family home since the time of Queen Victoria, and one we had hoped to see. Sadly it is closed during the month of September for annual maintenance.

The paintings alone are worthy of  a visit as the house contains over 75 pieces that any art gallery in the world would be proud to display.  I counted two by Henri Mattisse, at least four portraits painted by Sir Joshua Reynolds, and several Turners.  I am by no means anything close to an expert on art, but I have visited enough palaces, museums, and art galleries around the world to recognize the magnitude of the works that have been collected by the Roxburghes over the past 300 years.

Previous generations of Roxburghes had amassed collections that reflected the interests of their times, and there were entire rooms dedicated to their display.  That included one room that we actually found to be a little creepy – the Bird Room, which contained over 400 stuffed and mounted birds in mahogany cases that lined every wall room in the room, from floor to ceiling.

With lots to tell you about Floors Castle, but with little to illustrate it, I will move on to our final stop of the day, and it is the answer to why the author Dan Brown was included the title of this particular blog.  Any guesses?  How about if  I mention the  Da Vinci Code?

It’s Rosslyn Chapel, site of the climatic scenes in the book, and featured so prominently in the 2006 movie starring Tom Hanks. 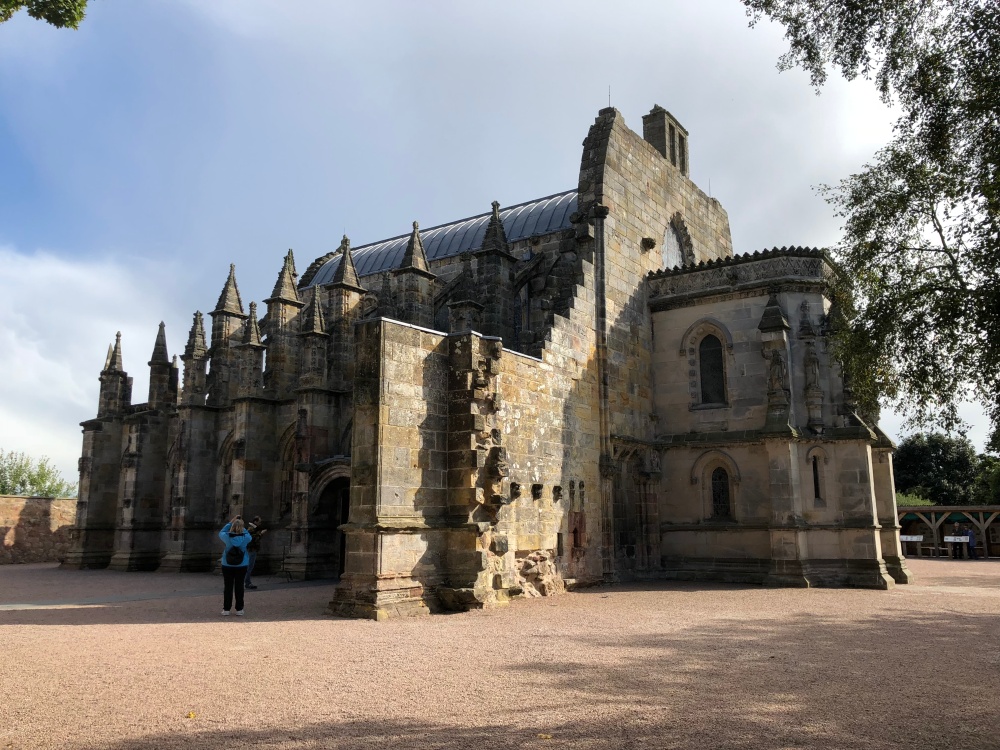 Rosslyn Chapel,  is a 15th-century chapel located in the village of Roslin, just a short 23 minute drive south of Edinburgh.  The Chapel is a lot smaller than we expected it to be, based on how it is portrayed (and shot) in the film, and given the notoriety it has achieved in the last 15 years, it is now a major tourist attraction – meaning that it was packed.

Since the late 1980s, the chapel has been the subject of speculative theories concerning a connection with the Knights Templar and the Holy Grail, and Freemasonry.   Medieval historians say these accounts have no basis in fact, but that didn’t stop Brown from weaving a fascinating tale about a woman, Sophie Neveu, who is said to be a descendent of Jesus Christ and Mary Magdelaine.

We caught the tale-end of a talk given by one of the guides, and truth be told, Rosslyn Chapel was moss-covered and in a state of rapid decay, not long before movie production began.  Today, it occupies a place similar to a visit to the home of Hollywood Star, and the tourism income that the book and movie has generated has built this previously and little-known Chapel into one of Scotland’s major attractions.

Frankly, we were a little disappointed, perhaps in part because of how commercial the site has become, and perhaps moreso, because the chapel itself was quite bright and scrubbed clean and not at all dingy, as it is portrayed to be in the movie.

Sitting in the car in the Rosslyn Chapel parking lot, we booked ourselves into the Bunree B&B in Dunfermline, a destination we thought would take us across the famous Firth of Forth Bridge, seen in this stock photo below.

Instead, we found ourselves speeding over the expansive Queensferry Crossing which just opened in August of 2017, and is reminiscent of the new Port Mann Bridge that links Coquitlam and Surrey over the Fraser River.  We pulled into our B&B just past 6:30 and as we settled in for a peaceful evening, Mary lifted a Wee Dram of her favorite spirit and toasted  another great day!