Today (Friday September 14) marked the beginning of our 3rd week on the road, and we were feeling a little sluggish towards the end of the day yesterday, so we decided to dial it back a bit. If you read yesterday’s post, I hinted that we might take a break from full Scottish breakfasts today (bacon, sausage, egg, mushrooms, tomato, beans, potato scones, and black pudding is the standard fare), and we checked out of our room at the Banchovy Lodge Hotel just a bit after 9 o’clock. 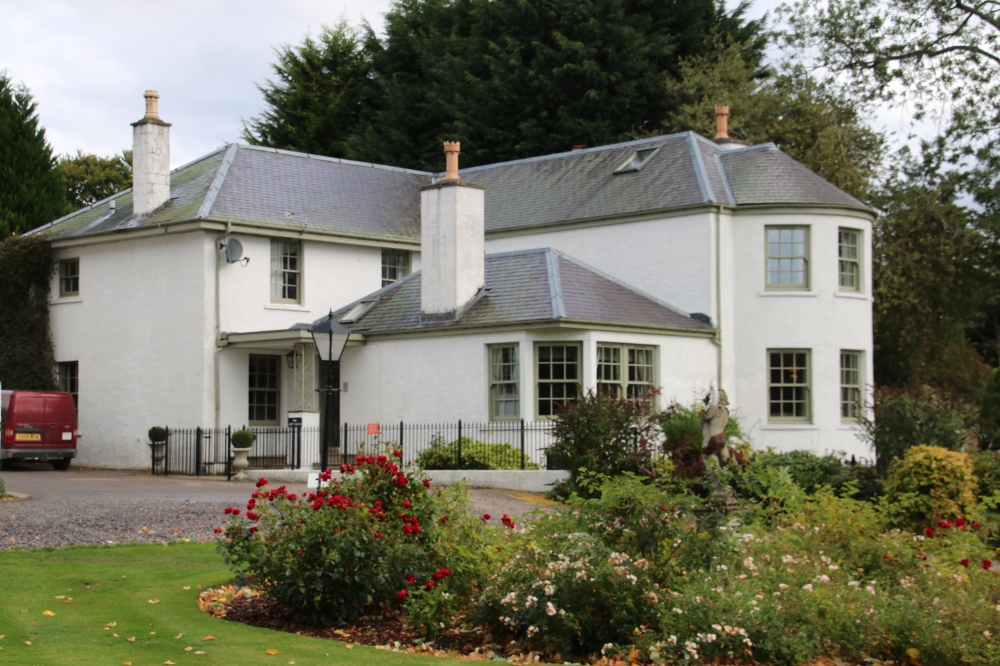 We made our way back to the Chatterbox where we had stopped yesterday for mid-afternoon tea. While it wasn’t raining, it was very grey and overcast, and there was a cold wind blowing

as Mary parked the car across the street from the restaurant.  We were the first customers of the day and ordered homemade scones and coffee to kick-start our day.  While we’ve been enjoying the scones in Scotland, as a rule they tend to baked much firmer than what we are used to at home.  It is also rare for these tea shops to have a toaster in which to warm up the scones.  On this occasion, we were feted with some delicious home-made jam and that helped compensate for the crumbly nature of the scone.

We were on our way shortly before 10, and our first stop of the day was Drum Castle, the ancestral home of the Irvine Clan, and just a short 15 minute drive northeast of Banchovy.  The castle has been owned and operated by the National Trust for Scotland since 1975, but prior to that, it was the family home of 24 generations of Irvines, covering more than 650 years.  The estate lands were awarded in 1323 by King Robert the Bruce to William de Irwyn for services provided to the king. 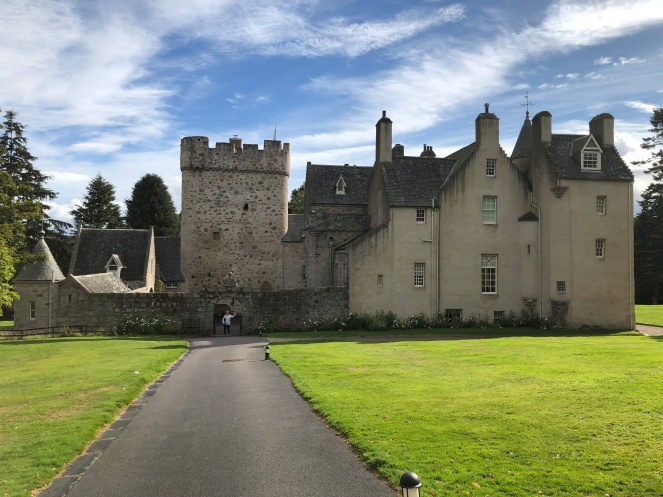 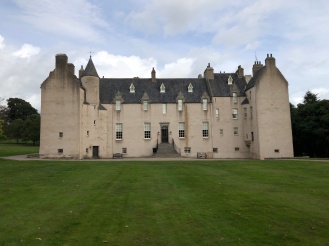 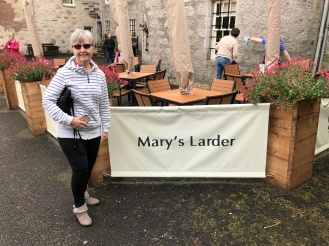 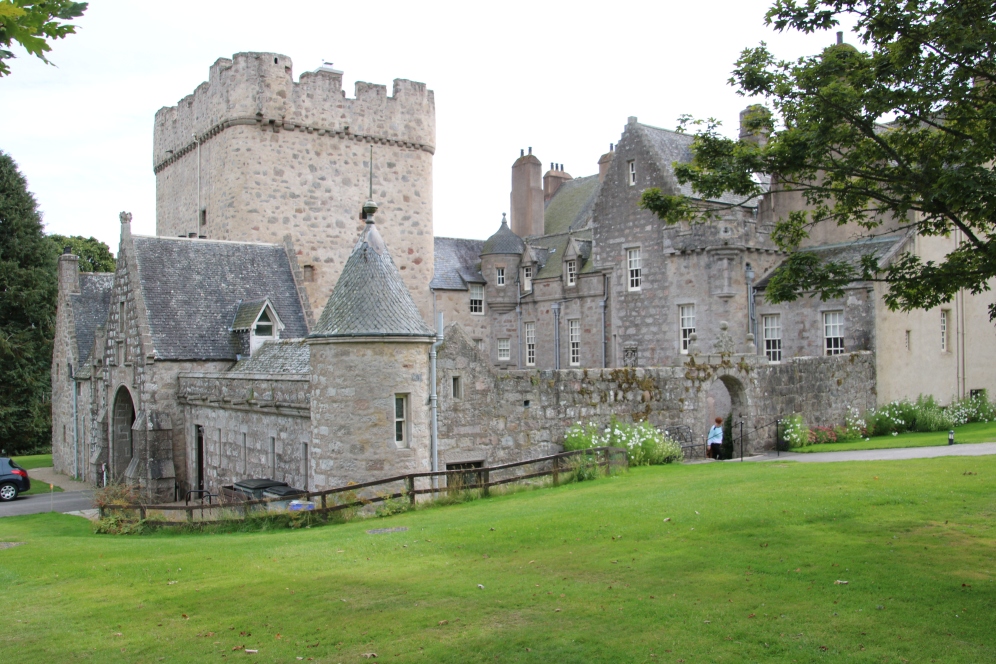 Drum Castle is just ten miles from the centre of Aberdeen, and is considered one of the most beautiful castles in the Royal Deeside region of Scotland. What makes Drum so special is that it combines a medieval tower (1323), a Jacobean mansion house (1619) and a Victorian era extension (1850-1882).

Upon our arrival, we found that we’d have to take a guided tour as opposed to being allowed to wander on our own, which we usually prefer.  Not to denigrate the guides who are extremely knowledgeable, but we like to set our own pace, and, increasingly we are finding we just don’t like being encumbered by a group.  In this case, the guide was excellent but was also very much an art-lover, and she spent an extended amount of time talking about the paintings in each room – and there were a lot as you can see from the picture of the Drawing Room below.

As a result of her passion, the guided portion of the tour took 95 minutes, and that didn’t even cover the entire castle.  Make no mistake, this was a beautiful castle, and each room had wonderful stories associated with them.  I particularly liked the dining room at Drum and was fascinated to learn that are only 11 chairs for the table, as opposed to the usual even dozen. 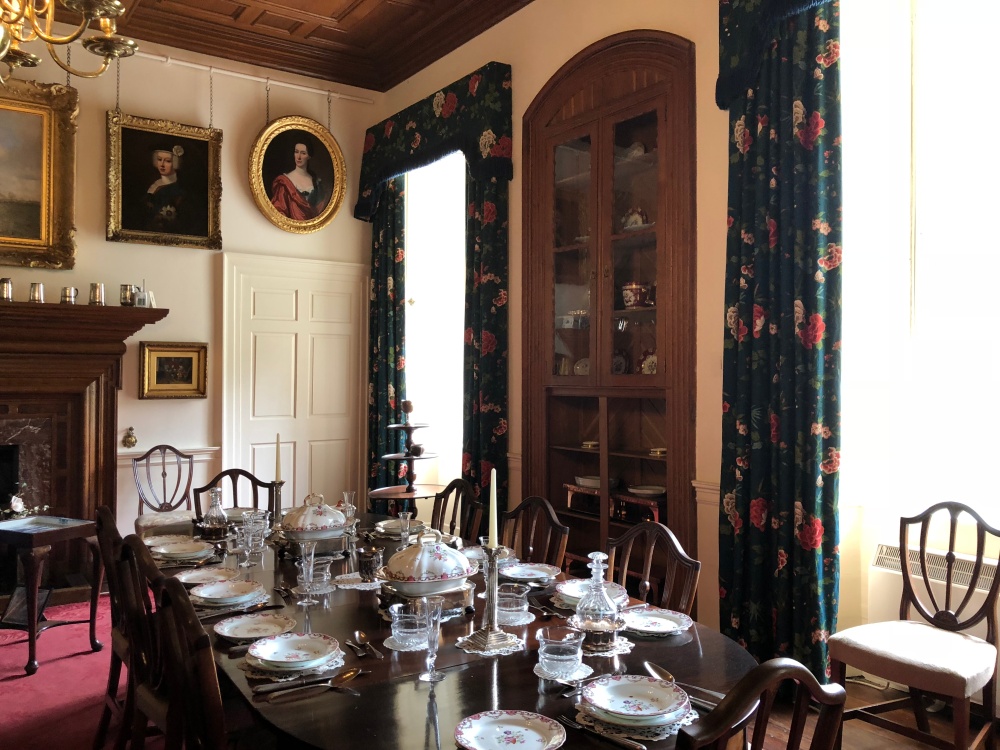 When the last Irvines left their home to the National Trust, they requested they be allowed to take one of the dining room chairs with them as a reminder of their time 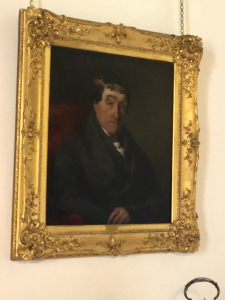 in the castle – hence the uneven number that remains.  The room was also full of Irvine family portraits and the one to the right caught my attention, probably because of the raised eyebrow expression of James Giles, the 19th laird of the castle.  He has no particular claim to fame, but I find so many of the portraits have a sameness to them, and I’ve never quite seen one like this.  I actually cracked up when I first saw it.

If you scroll back up and look at the picture of the Drawing Room, notice the colour and texture of the wooden door, fireplace and ceiling.  They are made from oak, something that can be found in abundance in the hunting forest and grounds that are part of the Drum estate.  This is the first castle where we have seen oak used so extensively.

The last image I’ll leave you with is that of the painting below which hangs in the library.  It is called the Archangel Gabriel by the painter Hugh Irvine, who was the son of Alexander, the 18th laird who ruled Drum castle for most of the 18th century.  The painting is purportedly a self-portrait of the painter, a rather narcissistic one at that. 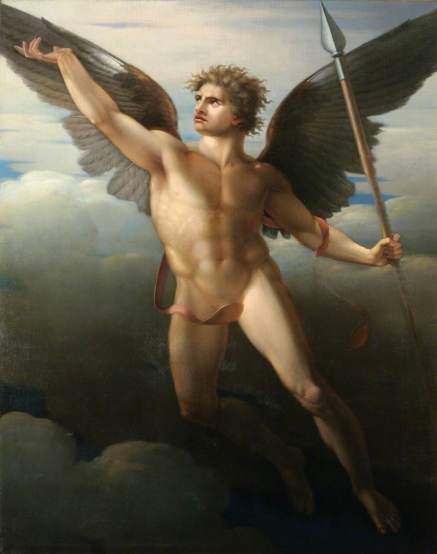 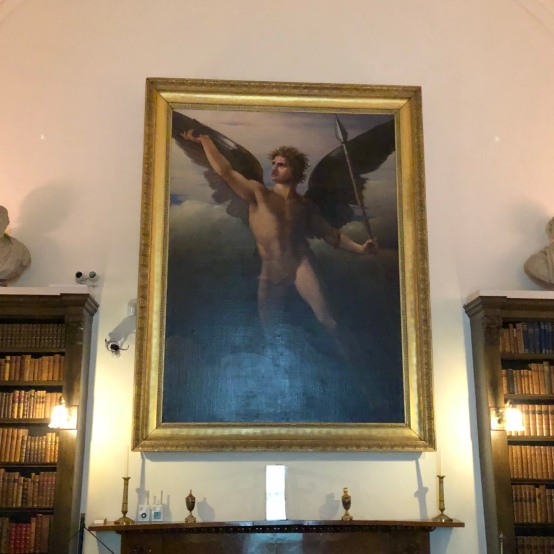 It was well past noon as we exited Drum Castle with our sights set on a visit to The Gordon Highlanders Museum, some 20 minutes further up of the Aberdeenshire coast. The Gordon Highlanders is one of the most famous Regiments in British Army history, and as Sir Winston Chuchill exclaimed in 1900, “they are the finest Regiment in the world”. 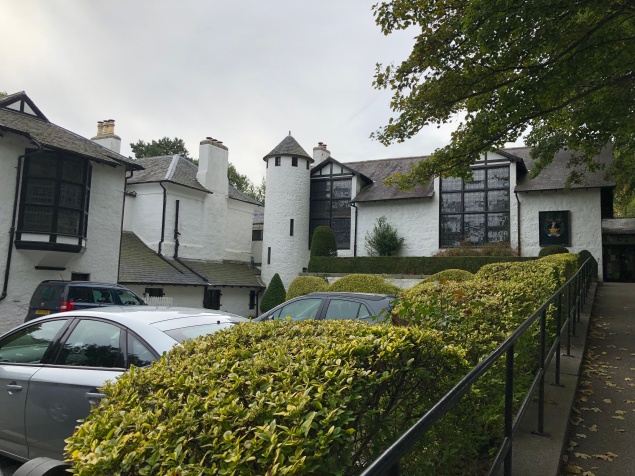 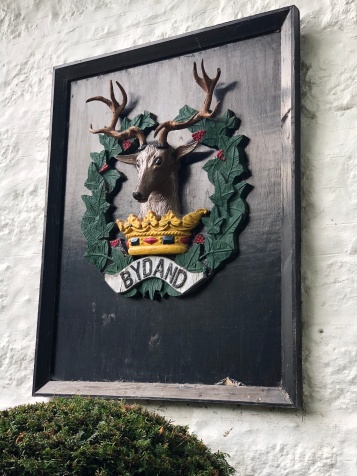 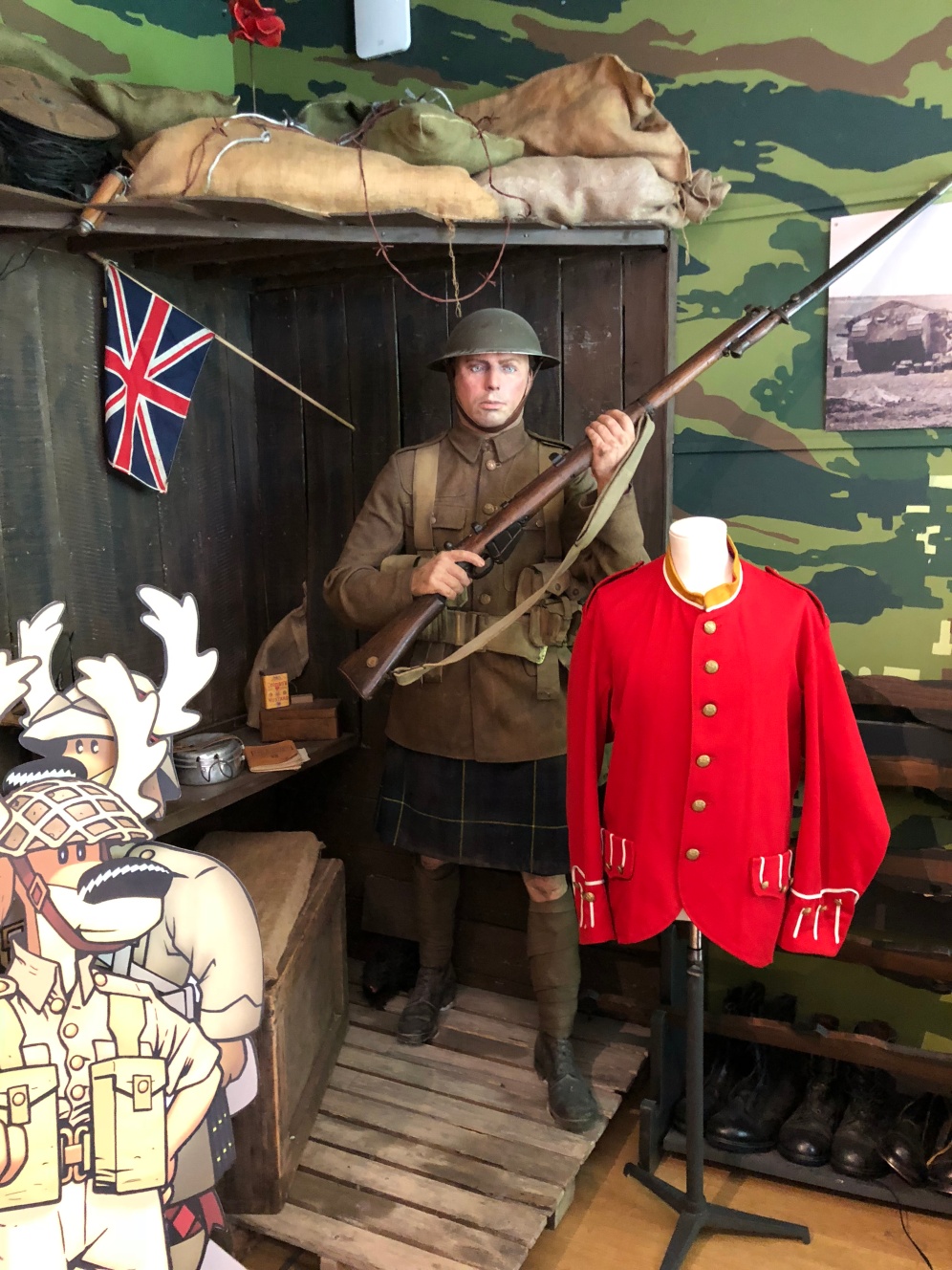 Established in July of 1881, they fought with great honour and distinction in the Boer Wars, and the First and Second World Wars. They continued to see active service in Cyprus, Malaya and Northern Ireland before their amalgamation with the Queen’s Own Highlanders in 1994.   They are closely aligned with the 48th Highlanders of Canada, whose Pipe and Drum Band have been part of the opening ceremonies for Toronto Maple Leaf home openers since Maple Leaf Gardens first opened in 1931.

The volunteers at the Gordon Highlanders Museum are extremely passionate in their effort to convey the history of this celebrated group of fighting men, and we once again 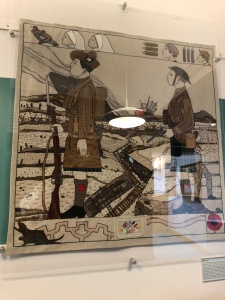 found ourselves ‘trapped” into a longer time commitment than we intended.  We were immediately enveloped by two veterans who wanted to give us a personal walking tour of the entire museum.  First, we watched a a 20 minute video on the history of the Gordon Highlanders. Then an absolutely lovely older woman took Mary into a corridor to show her some beautiful cross-stitch work done by family members.  She told us with great pride about a learning centre that has been established to give local school children a chance to learn the stories of the Gordon Highlanders and their heroic efforts afield.

Oh look, I think I see one of the big kids trying on one of the headdresses worn by the Pipe Band….. 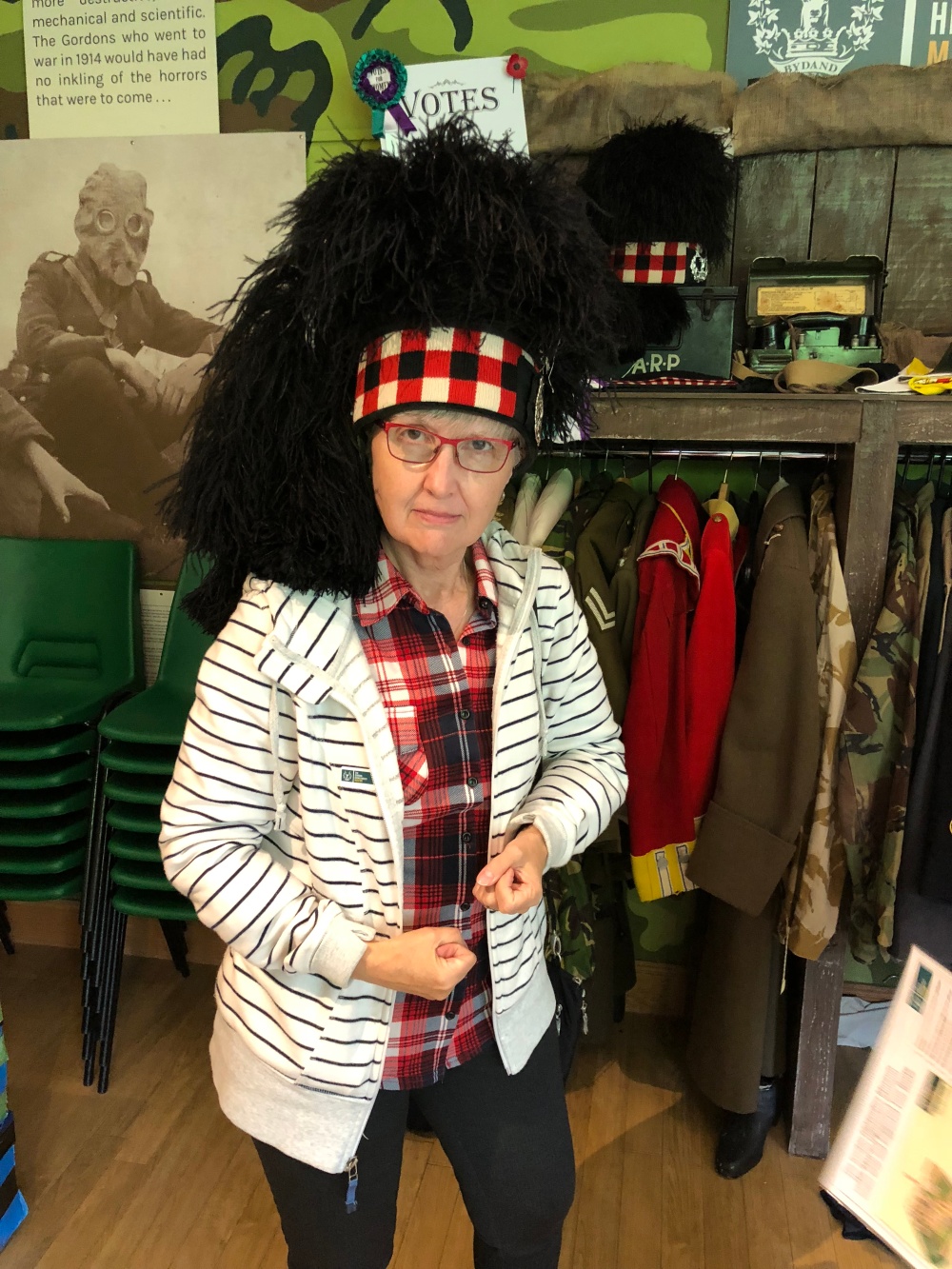 I love the look and the clenched fists.  As Shakespeare wrote in a Midsummer Night’s Dream, “though she be but little, she is fierce”.

After nearly two hours , we managed a gentle getaway, and I have to say, the passion and pride of the men and women who volunteer at the museum is justified.  Reading and hearing about the bravery and selfless contributions of the Gordon Highlanders  reminded us once again of the enormous sacrifices that previous generations made to give us the freedom which we enjoy (and take for granted) to this day.

We had originally planned to get to Aberdeen by early afternoon, park the car, and have a walk round the downtown area.  It is the third largest city in Scotland with a population in excess of 200,000, so we knew we’d find it busy, especially on a Friday afternoon.  I had also alerted Mary to the fact that Aberdeen is nicknamed “the Granite City”. as many of the best-known buildings and residences were made with locally quarried grey granite, which can sparkle like silver due to its high mica content. 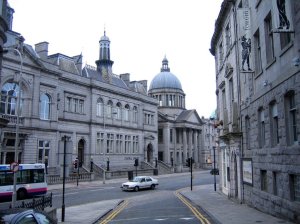 Unfortunately, due to the grey and gloomy day, there wasn’t a whole lot of sparkling going on.  In fact, the grey skies and the sea of grey buildings had a rather dulling effect on us, and as a result we were underwhelmed by Aberdeen.

I should also mention that we were on the lookout for a Marks & Spencer store to buy some underwear and socks.  While you might be amazed to learn that we had actually packed enough tops and pants to see us through four weeks on the road , we were getting low on “essentials”.  Having failed to find a laundromat in the past couple of days, we’d decided 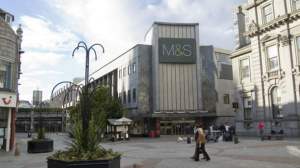 to just buy some new “stuff” to get us through the rest of our trip. We asked to Sid (our GPS) to guide us to the nearest M&S, and sure enough she pin-pointed one for us.  What she failed to determine for us, was that downtown Aberdeen is a maze of one-way streets with limited parking (except for some well-hidden ramp lots).  We could see “Marks and Sparks”, as my dad used to call it, but we just couldn’t get to it, and damned if we could find a parking spot either.

It was now 4:30 on a Friday afternoon, so we made the call to “move on” from Aberdeen, noting that it would be worth a well-planned re-visit during a future Stanger Adventure. Turning to Google maps for some more reliable input than Sid had been giving us lately, I selected the town of Peterhead, some 45 minutes north, as our final destination for today.

The drive north was somewhat bland, for although we were fairly close to the North Sea (to our right), our views were limited by rows of trees and heavy traffic heading south toward Aberdeen.  As we approached Peterhead, we spotted Buchaness Lighthouse, which marks the entrance to what was a far busier and bigger harbour than we expected (we had never heard of this town before our trip but it is a major service centre for both the fishing and natural gas industries). 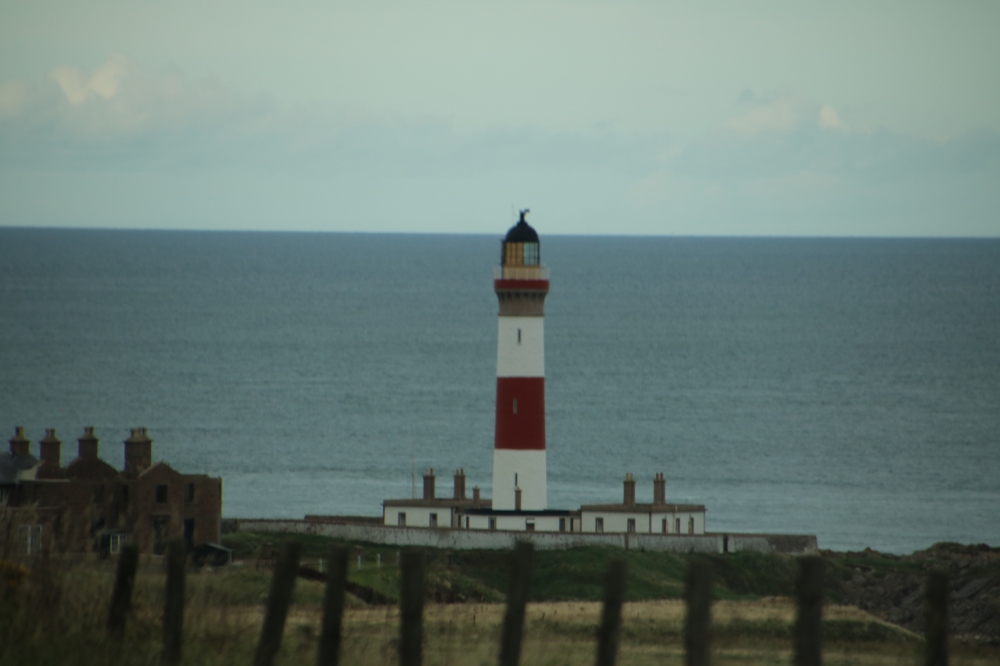 Just past the lighthouse on the A90, and just south of the town of Peterhead,  we passed the massive Peterhead Power Station complex.  It is a multi-unit station which means that it burns both gas and oil, and there are discussions underway to introduce hydrogen produced power as well.  We had left the industrial looking towns and cities of Scotland behind us several days earlier, so it was a shock to see such a large industrial site again. 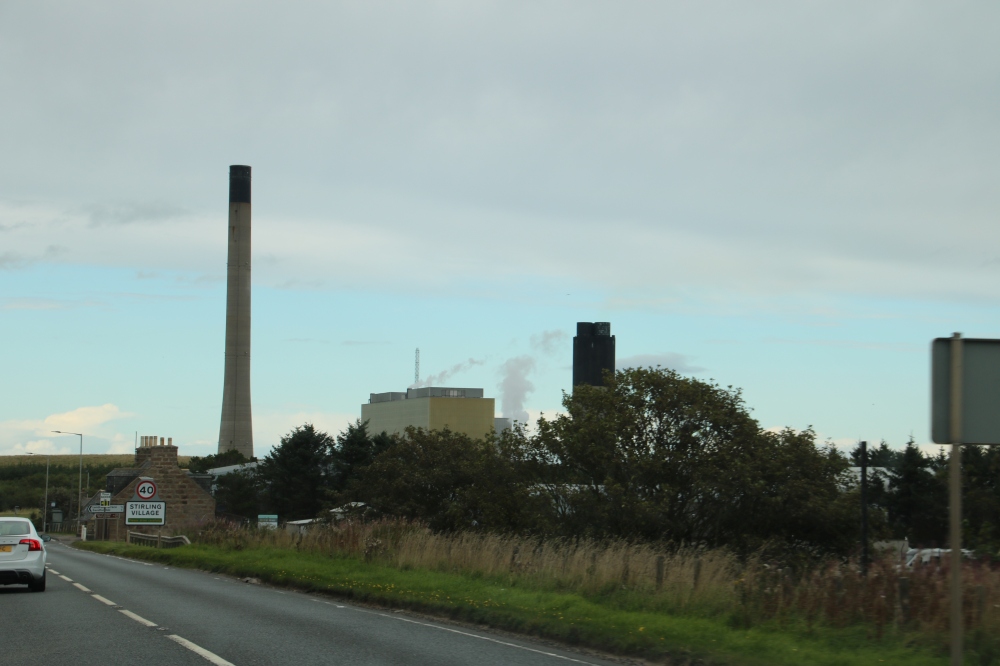 Since Peterhead is an industrial city, there wasn’t a plethora of choice as far as 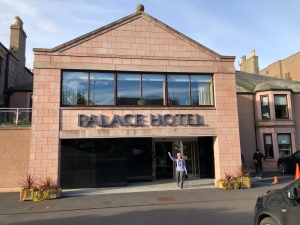 accommodations are concerned, but I managed to book us into the Palace Hotel. It turned out to be very comfortable, had great food in their restaurant, and a delightful front-desk staff.  We still had to deal with the challenge of “running short of shorts”, and one of the ladies at reception suggested we drive to ASDA, a local grocery store chain and a subsidiary of Wal-Mart.

more than a grocery store, and has significant square footage devoted to their in-store clothing brand “George”.  It was a great recommendation and Mary and I were able to stock up on comfortable (and cheap) undies and socks, enough to last the remainder of our trip.

I spent a relaxing evening reading and blogging, while Mary broke out one of the mini cross-stitch patterns that she’s been purchasing during our travels.  You can see she has assembled quite a collection, and one that is very representative of the places we’ve been, the things we’ve seen, and the culture and history that we’ve been immersed in. 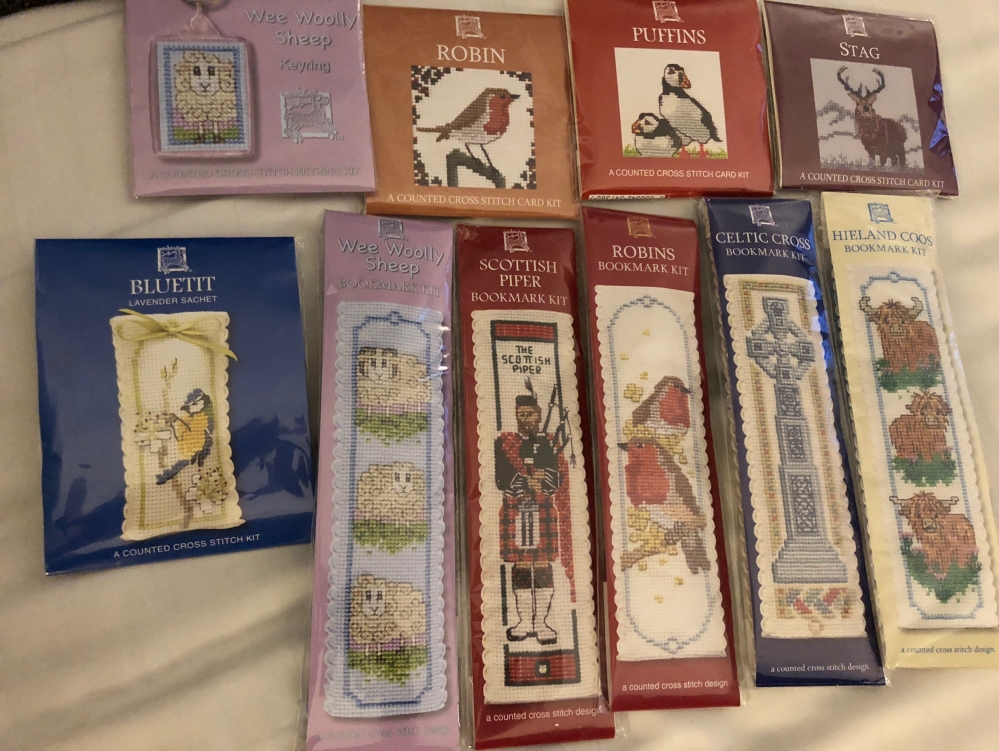 I’m super-excited about tomorrow because our first stop of the day will be Slains Castle, which served as the inspiration for Dracula’s castle in Bram Stoker’s Gothic horror novel written in 1897.  I can’t wait to see it.